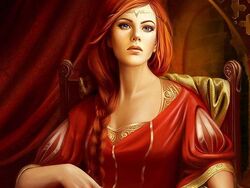 Vivivana was born in Silverhome, a medium-sized Thyllanorian settlement within the gold and silver rich mines of central-eastern Thyllanor. Her father Garion Messys was a strict man, being in the Thyllanorian military since a young age. Her mother Delthine Messys was a noble lady, teaching Viviana the basics of being a lady of high birth. Before being betrothed to Dalan Karthmere, Lord Paramount of Thyllanor, she was betrothed to Janson Silver of the Moonlyt Peaks, however he died after a drunken falling accident.

Life as the Lady Paramount of Thyllanor was rougher then she imagined. Much was expected of her, by her husband and by the nobility of Thyllanor. However, she lived well, even bearing three children for Dalan Karthmere. She was known for her beautiful red dresses, expensive jewelry, and the finest silks. The Lady Paramount lived well and rich for many years.

Dalan Karthmere had declared the Farrowhalt Freehold independant and delcared war on the tyranny of King Aegor Dragomyr, wishing for a free independant and democratic Thyllanor. Years of war took it's toll on Viviana, as she feared for the saftey of her husband and her family. She had mixed feelings on the war, and during the end of rebellion, begging for Dalan to either end the conflict or letting the freehold fend for it's own, as she feared for her family, mostly her children.

During the last year of the rebellion, her worst fear had come true. Dalan Karthmere was slain on the battlefield after defending what remained of his freehold. The Lady was devistated and remained in Faercrest for months, refusing to leave unless it was to care for her children. During the trials Veddel Markwell and [[Michael Avleston, Viviana conversed with Tyralt Karthmere, the newly appointed regent and brother of Dalan. She hated the two men her persuaded her husband to rebel, and decided that both former freeholders deserved execution for their fruitless war.

She was the only Karthmere to attend the executions of Michael and Veddel. However, when the headmans sword swung down on their necks, she felt a bit of sympathy for them.

Years after the rebellion and the waning years of Tyralts regency, Viviana learned to deal with the death of her husband and moved on to help her children live normal lives as Thyllanorian nobility. She was later killed in the Bloodmoon Riot of 341 AC.

Retrieved from "https://a-crowns-price.fandom.com/wiki/Viviana_Messys?oldid=9509"
Community content is available under CC-BY-SA unless otherwise noted.