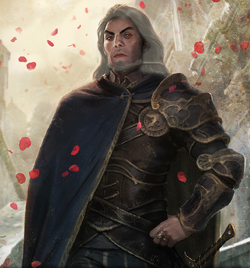 Season(s)
2
Titles
Lord of the Taranyon Estate, Head of House Taranyon, Inheritor of Caelthon Taranyon's riches
Also known as
N/A
Status
Alive
Age
42
Date of birth
January 3, 309 AC
Death
{{{Death}}}
Origin
Taranyon Estate, Meyron
Allegiance
House Taranyon
Meyron
Religion
The Five Paragons
Family
House Taranyon
Portrayed by
N/A
Varen Taranyon (born January 3, 309 AC) is perhaps the most wealthy man in all of Doras Edrossi. He is a Meyronian landowner, merchant, business owner, and patrician, with a hefty share of votes in the Meyronian council. He was born into his utter wealth, with his most distant known ancestor, Caelthon Taranyon, having participated in the Dragonsteel Mine crisis and returning to his home of Meyron with over fifty pounds of dragonsteel to himself. Selling it all and forging an ancestral blade out of what remained, he founded a large plantation outside of the city and bought special rights to land inside Meyron city proper, building the Taranyon Estate upon it.

Varen himself is an incredibly extrovertive man. He lives to attend the next ball or faire, and will stop at nothing to gain from it. Away from public life, Varen is a cruel entrepreneur but an incredibly effective one. He has several Zaentovi 'servants' which, under other circumstances, would likely be considered slaves, especially in Thysia. Hiding much from the general public, he instead enjoys the portrayal of love for the high life and taste for adventure that he gives off of himself, and expects to die rich and happy in a venerable old age with many children and grandchildren by his side.

He has two children born in wedlock, Varen Taranyon the Younger. and Olphia. He also has a legitimized bastard daughter, Delaenera, born to one of his Zaentovi housemaids. Delaenera is the oldest of his children, with Olphia and Varen the Younger coming next, respectively.

Retrieved from "https://a-crowns-price.fandom.com/wiki/Varen_Taranyon?oldid=9391"
Community content is available under CC-BY-SA unless otherwise noted.