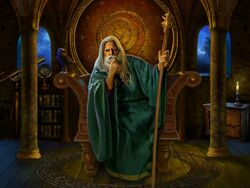 Season(s)
N/A
Titles
High Councillor and Founder of the Strezici
First of the Stremagio
Also known as
N/A
Status
Unknown, presumed dead
Age
Disappeared 7151 BC (aged 102/103)
Date of birth
c. 7254 BC
Death
{{{Death}}}
Origin
Drakonia
Allegiance
Drakonian Kingdom
Drakonian Republic
Religion
The Dragonlord
Family
N/A
Portrayed by
N/A
Vaelus Strycchimarus Duverius Tanaras Amelar, better known as simply Vaelo, was a Drakonian stremagio (the first of his kind) and a member of the Strezici (also the founder of the order). Vaelo was highly influential on Drakonian culture after the Reviscio, bringing to light the abilities of magic as never-before seen in such a manner. Such was its ability to put Drakonia on a new path, in fact, that the period during which Vaelo crafted his four critical magical formulae and demonstrated their use was dubbed the Magical Revolution. The Drakonian people would prosper in ways unprecedented, eventually rising to form the world's largest empire and influencing nearly every culture on Drakonius in some fashion due to their combined might of dragons and magic. Some consider Vaelo to be even more important than even Aenarion Dragomárus or Aevorius, in that regard, insofar as how much they contributed to Drakonian prosperity.

Originally a lowborn who originated from a family of ranchers in the Embergleam Range, Vaelo's parents managed to scrape up enough money to send him to an apprenticeship in the city of Drakonia for whatever he wished to pursue. It was around this time that he discovered he had an innate ability to cast magic, having the self-proclaimed abilities of husbandry and a primitive, undeveloped grasp of scrying; he could describe, in some detail, the tale of Aenarion Dragomárus and how he built Drakonia with Gavarex, but also stated that Aenarion was not unaided at this task. This claim of Aenarion being anything less than omnipotent was a controversial statement, however, and it is one which is still disputed in its veracity. While spending his time tending to the animals, it gave him plenty of time to think about the world around him -- it is said he would spend hours at a time underneath a tree, thinking about the meaning of life and what the end goal of his own life would be. He decided that he would try to become a scholar of philosophy, applying at the Academia Drakanor in 7232 BC, roughly around the age of 22. After demonstrating his prowess that was honed after no doubt days of deep introspection, he was accepted and became a student, which is when his studies into magic began.

Life during and after the Academia

Vaelo was an exceptional student; he was consistently the highest-rated pupil in his class, and the favorite of many mentors. Leaving the grounds of the Academia following the completion of his philosophical studies in 7228 BC, he kept in contact with many of his peers who had been exposed to his magical insight through several years of time spent with him. Eventually, some of them would also join him in these studies, and would form the basis of the first Stremagi. He then spent a period of roughly 25 years in which he did little more than attempt to cast magic beyond his grasp. Despite being only inherently gifted in two fields, he had assumed at the time that there were other ways to affect the world around him. Alongside philosophy, Vaelo was taught mathematics in the Academia, and this helped him create formulae that would come to 'un-boundary reality', his own term for magical use.

In his first such paper, he acknowledged:

This fusion of maths, philosophy, innate ability, and mediation led to the Magical Revolution, and led to Vaelo claiming to be enlightened beyond most men's comprehension.

Retrieved from "https://a-crowns-price.fandom.com/wiki/Vaelo?oldid=10009"
Community content is available under CC-BY-SA unless otherwise noted.