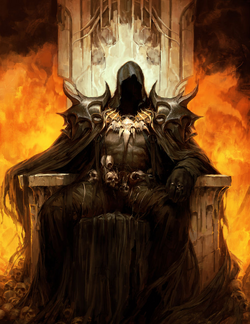 Season(s)
1
Titles
Lord of the Shadowlands
Also known as
The Great Destroyer
The Shadow
Status
Eternal, possibly banished
Age
Immortal
Date of birth
Unknown
Death
{{{Death}}}
Origin
Unknown
Allegiance
Dark Forces of the Shadowlands
Religion
Unknown
Family
Unknown
Portrayed by
N/A
The Shadow, also known as Faranohr in Drakonin and The Great Destroyer in Andoras, is a powerful and evil deity whom is directly responsible for many tragedies and wars, such as the Dragon Wars and the War of the Shadow. He is also believed to be part of some religions, such as The Dragonlord faith and the Five Paragons. The Shadow was defeated in 478 BC and was believed banished from the world, however many believe that the Shadow still manifests himself in the Shadowlands and heed that he may return.

The Shadow is presumed to have existed since the beginning of time, coming into existence at the same time as or immediately after its polar opposite force. Whatever the Creator made, the Shadow would seek to undo, with the two forces seeking to ultimately establish their respective balances in the fledgling universe -- perfection in the Creator's case, and entropy in the Shadow's.

Accounts of an evil force pervading Drakonius go back to the Age of Legends, where ancient Zaentovi tablets dating from pre-Drakonian times described an impenetrable black fog coming from the southeast. Before the fog came, the land was described as an idyllic, verdant forest plain. After it passed, the realm was turned into a hellish wasteland.

Furthermore, Denemd, an island to the far east of Frostfall and north of Tegrush, has always been connected with some sort of dark force. Anyone who journeys to the island, if they survive the ordeal (many simply die of what appears to be natural causes if they attempt to explore the island) will eventually become mentally deranged, experiencing hallucinations and voices that are not there. Notable sufferers of an ailment similar to this are the Drakonian people after the Gladiator War, which then lead to the Dragon Wars, Nobilis Karthmere, a Highlord of Thyllanor in Andoras who is cited by many as one of the worst rulers to ever grace the continent, and Aegor IV Dragomyr, whose slowly progressing madness lead to both the 326 AC rebellion and 346 AC rebellion. This meddling of one's very mental constitution is not publicly accepted as the Shadow's doing, but those who dabble in the occult and magic like the Bogdwellers of The Wetlands and the Strezici of ancient Drakonia seem to acknowledge this as the truth, many of whom come to suffer the same fate due to their meddling in these powers.

The Shadow fulfills the role of an antagonistic archetype in many world religions, most notably the Five Paragons -- he is better known as the Destroyer in Andoras, a force destined to wipe out all of the Creator's doings, eventually the entire universe itself. Various champions from the world, known as the Paragons, were dubbed such by the Creator in order to combat the Destroyer's influence on Drakonius.

In The Dragonlord, The Shadow better fits into the role of Messeneth, the bringer of destruction -- however, Messeneth might also be refuted by some as just as a mere servant of Faranohr, the Drakonin word that roughly equates to 'dark one' or 'evil being' in the Common Tongue. Faranohr is believed to be the Shadow's true name, as it was this thought that pervaded the minds of Drakonian scryers when they attempted to delve into the evil force's being. Whether or not the Shadow has chosen this name -- or if it even has a desire for one -- is unknown, but for the educated Faranohr is a dark word, one that should not be spoken in most circumstances. The Shadow is a much more acceptable connotation, as saying its name is believed to be equivalent to invoking the Shadow's power itself.

Faranohr, the Shadow's 'name', is also not believed to be related to any language -- the word does not naturally sound Drakonin, and its spelling is based only on conjecture. Other spellings that more closely follow Drakonin phonetics are Farannor, Farenor, and Farahnor. The accepted spelling of Faranohr was believed to have been derived from a Drakonian priest of Messeneth, whom consulted with dark magics in a manner similar to the scryers but far more directly.

It is unknown what the Shadow truly is. Various religions have him or an evil being much like him in their mythos, but what can be said for certain is that he appeared in the Shadowlands in a physical manifestation, and was the leader of many monstrosities and horrific armies during the War of the Shadow. By miraculous measures, the Shadow was defeated, after the legendary emperor Draqipane Dragomyr mustered the forces of almost all men on Drakonius, marching on the Shadow's domain with over a million men prepared to die for their world.

The few eyewitness tales that survived both time and believable account give roughly the same story; when defeated, the Shadow exploded into a million carrion flies, turning into an inverted vortex that stretched into the heavens and slowly faded; the skies gave way to blue skies, if only temporary, which to known history had never been seen before in the Shadowlands. Although many agree it is impossible to kill a force as primordial and malleable as the Shadow, some believe he has been banished from Drakonius, or at the very least weakened to the point where it can not reform into a physical shape and raise armies once more. Since then, over 800 years have passed -- no news from the Shadowlands abounds, so it is assumed the Shadow is either brooding or has been barred from the world.

It is perhaps not apt to refer to the Shadow as a masculine being (i.e. "he", "him") because such a being would have no ties to sex or gender. It requires no need for any such labels, nor any ability to reproduce -- even if the Shadow was a creator of some kind, it certainly would not need mortal limitations to do so. However, art depicting the Shadow usually involves a human figure, as this is how many can best interpret its form. Its most popular depiction, a hooded faceless man with skull-adorned armor, was based off of how it appeared to the Alliance of Men at the War of the Shadow's climactic final battle in 478 BC. Art also depicts this figure with a long scar down its torso, to represent where he was finally overwhelmed and mortally wounded by Draqipane Dragomyr.

Other depictions differ varying by religion, such as the Dragonlord where some believe the Shadow to be analogous to Messeneth; the Shadow's form takes that of a large dragon in this case, and the Zaentovi Nature Beliefs, where the Shadow (or a similar malevolent force) is represented as a deep rift of pure darkness where no end lies at the bottom.

Retrieved from "https://a-crowns-price.fandom.com/wiki/The_Shadow?oldid=10167"
Community content is available under CC-BY-SA unless otherwise noted.