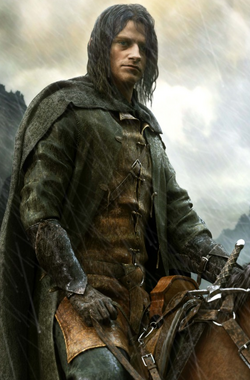 Syr is a short, stocky boy with green eyes and chin-length dirty brown hair. He is average-built with broad shoulders and a wide stance. His skin was paler than was typical, and his face was round and somewhat lined.

He almost always wore a thick green coat aswell as a cloak and hood, though while ruling the hood was down, with leather brown garments below. A thick belt is strapped around his waist, a coinpurse, a quiver, and a sword and sheath fastened to it. Outside of his castle he was usually on horseback, a long bow hanging from the horse's saddle.

Syr was a cocky sort, sure of himself and his lands, and happy with his power. He used his freedom to spend most of his time hunting or fishing, leaving diplomatic quirks to his council and advisors, earning him the nickname of "Ranger-Count" by his fellows, a title he accepted quite amicably. He often praised the bow as being both more elegant and deadly than a sword or mace, looking down on those who preferred what he called "brute force".

He was often admonished by his council for this behaviour, all of whom were older and had been on the council when his father ruled, but he typically ignored their chastisement, reminding them who was Count of the lands. He enjoyed feasts and parties, holding many for the local nobles and taking the time to try and seduce another noblewoman.

Born in 8E 330 to parents Jogle and Keila Moran, Syr would be an only child his entire life, and the rightful heir to the County of Manewall, which was currently under the occupation of the Dukedom of Caden. He grew to resent this, growing up with tales of Bogdan Sewick's crimes and horrors against Manewall, and held a great deal of bias against the entire House Sewick for it. He was betrothed to Leena Voll when he was merely 15 and only two months before he took the title of Count. After his father's death and his ascension to Count, the two sired a child which caused Leena's death in childbirth, her final words being her desired name for the boy. Syr cared little for his wife, and instead named the boy Teryn after his grandfather, naming him his heir.

His advisors informed him of the Dukedom of Caden's defensive stance in the rebellion, and noted how most of their forces were tactfully positioned along the southern borders, and advised him to have his soldiers defend the northern borders. Struck with personal envy of Caden's power and desire for independence, however, Syr sent a missive to Catina Sewick demanding independence, and readied his forces for war, much to the dismay of his council. To Syr and everyone's surprise, however, a missive returned accepting his demand and peacefully granting Manewall independence, though the missive warned that this would not last. Syr happily ignored this warning, confident in his own victory and revelling in his council's stunned admiration, them having expected another losing war with House Sewick.

Syr had long forgotten Catina's warning, and has been spending the past four years whoring and hunting, enjoying the luxuries of being a Count with no responsibilities. His people would mock him behind closed doors, though the occasional blunt noble or warrior would call him for being a craven or lecherous boy to his face, he tended to have these people beaten within an inch of their life by his Guard.

Retrieved from "https://a-crowns-price.fandom.com/wiki/Syr_Moran?oldid=9416"
Community content is available under CC-BY-SA unless otherwise noted.