Start a Wiki
Setho of Dornum 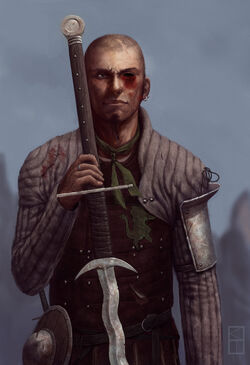 Season(s)
N/A
Titles
2nd in Command of the Slaves in Drakonia
Also known as
The Victor/The Martyr of Free Drakonia
Status
Deceased
Age
Died 525 BC (aged 42-43)
Date of birth
c. 568 BC
Death
{{{Death}}}
Origin
Merythaia
Allegiance
Formerly, Drakonia
Later, loyal to Senzesuole and the slaves he commanded
Religion
The Dragonlord
Family
N/A
Portrayed by
N/A
Setho of Dornum (c. 568 - 525 BC), sometimes referred to as just Setho, or more recently, with his status in the Church of the Five as a saint, St. Setho, was a Drakonian former gladiator turned revolutionary and liberator throughout the Drakonian Empire during the Gladiator War. He was born sometime in 568 BC to parents who abandoned him, leaving him to be raised in the arena, where he became good with a flamberge and used it as his primary weapon of choice, becoming quite perhaps the greatest fighter in all of Drakonia at one point.

Little is known of Setho's early life, perhaps even less than most figures of his time. He had no parents to call by name; it is believed they abandoned him at a young age to the arena. Setho himself never talked about his parents, but felt no grief about the subject, often bringing up that he could not feel angry or sorry at people he had no idea ever existed. To him, the only parents were the gods and the matrons who had brought him up in the arena.

He met his future commander, Senzesuole the slave, in a battle against him in 549 BC, who according to records, was the only battle in which Senzesuole did not win on a national scale. Setho was given the command to kill him when he was vulnerable, but stood down and saw the good in his eyes, leaving him to leave. Later, when Setho was being punished for his insubordinance, his left eye was clawed out and he lost two fingers on his left hand, which was dubbed 'a reminder towards those who save objects they don't own.' While not a slave in his own right, Setho was imprisoned like one after the ordeal, and Senzesuole came to save him a few months later, and with him at his side, the slave uprising, named the Gladiator War, picked up speed until it became inevitable to fight against Drakonia, and after a grueling war that killed all but a minute portion of the slaves involved, the Drakonians gave up the fight and allowed all remaining slaves to go free. Setho, while not considered one of the slaves, fought alongside them from the snowfields of Merythaia in 548 BC to the final battle near Thysia in 531 BC, where an upset victory cost the Drakonian army and the whole empire the war. While the signs of collapse and upheaval were noticed as more and more slaves ran off to fight, it became readily apparent immediately after the war ended and within less than a year, the Dragon Wars began, which would last another 30 years, use up all of Drakonia's excess and reserve resources, completely torch the peninsula, destroy the empire, and force the Dragomyrs to eventually emigrate to Andoras, where they would conquer the land and form a kingdom there in dedication to Drakonia's once great influence. All other Drakonians were faced with the option of staying to die with their homeland or emigrate elsewhere.

Setho, however, did not make it to the end of the war; and neither did Senzesuole. He died in 525 BC, while still reserved to fighting, this time for the side of House Varalys, who had subjugated Drakonia in the Second Era and now seeked to attack House Dragomyr for their impotence; but most of all, the bitter houses, who were in a blood feud, mostly looked for an opportunity to strike against each other. Setho disliked both sides but chose the one that went against Drakonia. Senzesuole had retired from the front by this point, tired of fighting and most of all tired of losing his men. He himself died six years later partially from an attempted assassination and a sickness which manifested itself at an opportune time.

Retrieved from "https://a-crowns-price.fandom.com/wiki/Setho_of_Dornum?oldid=10248"
Community content is available under CC-BY-SA unless otherwise noted.