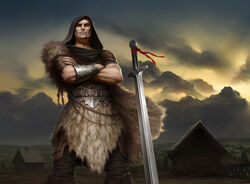 Season(s)
N/A
Titles
Commander of the Rebel Uprising in Drakonia
Also known as
Man of Merythaia
Status
Deceased
Age
Died 519 BC (aged around 55 or 56)
Date of birth
c. 575 or 574 BC
Death
{{{Death}}}
Origin
Merythaia
Allegiance
Formerly, Drakonia, out of necessity
Later, himself, his slaves, and his cause
Religion
The Dragonlord
Family
N/A
Portrayed by
N/A
Senzesuole (c.575/74 - 519 BC) was the leader and mastermind behind the slave rebellion in 548 BC, later dubbed the Gladiator War for Senzesuole's position as a gladiator for sport in the old days of his slavery. Once rescuing Setho of Dornum, the only man who had ever beaten him in a gladiator fight and the only man who had ever spared him, the movement began to pick up speed until eventually it was unstoppable and war had become inevitable. Senzesuole lived throughout the entirety of the war, but did not finish it with nearly as many men as he started with; a massive 30 million reduced to a measly 100,000 freed men. He died of a sickness towards the end of the year in 519 BC, while the war was just barely at its midpoint and most of Drakonia still remained intact. It is believed he would have recovered from this sickness, had he not had an attempt on his life just a few weeks prior which left his whole body weak and paralyzed from the waist down. 19 years after his death, the movement which had led to the destruction of Drakonia finally came to a stalemate and all related parties relocated, unable to dwell in Drakonia and the city-states abandoned to exist on their own. This is, then, the man who was indirectly responsible for changing history forever, with the destruction of Drakonia.

Senzesuole's remains have never been found. It is probable they are somewhere in the ruins of Drakonia, but with the charring of the city and eventual sacking of it, his body is likely no more.

Senzesuole was born sometime in 575 or 574 BC, to Drakonian peasants living in the city of Merythaia. He claimed himself that he was born in 571 BC, but this may have been to convince the slaves he was leading of his youth. When he was young, an elder slave, who Senzesuole called "Pithys", which means "sea serpent" in Drakonian, taught him how to read and write, a rarity among the slaves, not to mention outlawed. From an early age, every day after sundown, he and Pithys would gather together and Senzesuole would share the stories of his day while Pithys would teach him how to express himself. When Senzesuole was discovered talking to Pithys, he was killed and Senzesuole was captured and taken in as a slave himself. Senzesuole was taken from Merythaia to the south, to Drakonia itself, where a rich slaveowner and troubadour purchased him for 300 dragons. It is believed Senzesuole was around 12 when this occurred. Although he had a name prior, the slaveowner called him senze-suole (roughly translating to "without soles" in Drakonian) for his flat fleet; they had no arch to them.

As the boy grew, the slaveowner found that he was in a very fit shape, and began to have him see a cruel Thysian trainer, who beat him and eventually trained him to become a pitfighter. Finding that unlike his style, Senzesuole was made a gladiator, and put into a bout against a fellow slave. Senzesuole himself said that this is where his feelings for freedom began to appear, when he realized that men above him treated him and his peers like mere objects. Defeating the slave, but with great shame, he slit his throat and walked away.

Doing surprisingly well on his first fight, Senzesuole's name first appears in official records in 554 BC, during a bout against a fighter named "Duren 'the Bulldog' Brouvdon". Senzesuole is simply listed as "Senze-suole, slave." Senzesuole, adept with a sword, killed Duren and proved himself as a formidable foe and an incredibly respected man in the eyes of his fellow slaves. Unlike him, Duren was no slave, but a man who had been training to be a gladiator since the day he was born under the caste system in Drakonia. The Brouvdons had been known for their fighting prowess in a ring for hundreds of years prior, although they were no nobles.

Senzesuole continued to win fights against hundreds of would-be gladiators, rising to the top of the rankings in Drakonia. All records of his life are lost until 549 BC, when they begin to pick up again.

Soon, he found himself within national competition, as the best gladiators from the various city-states began to become rivals to Senzesuole's prowess. He defeated all but one, named Setho of Dornum, who had spared Senzesuole's life in 549 BC, at his own expense; Setho later had his left eye clawed out, and lost two fingers on his left hand for the mercy he had shown Senzesuole. Promising to avenge Setho for sparing him, Senzesuole began to hatch a plan to escape from his shackles and become a revolutionary to rescue all slaves of the Drakonian empire and become a hero to time.

Daringly escaping in the dead of night using nothing but a rusty nail for a lockpick, he was nearly caught before he escaped into the woods surrounding Drakonia's suburbs, hiding out from society but knowing his first taste of freedom since the day he was captured. He noted himself that it was winter when he escaped, and he had struggled to keep himself warm and nourished. Resting for a few days and continuing to hide from routine Drakonian patrols in the area, he began the long hike north to where he was born; Merythaia, where he knew he would find Setho and make him the first man to join his force against the Drakonian tyranny.

As a freedman and revolutionary

Senzesuole reached Merythaia within a month, by which time it was already early 548 BC according to Drakonian records. He had dwelled in the city for several weeks without little activity, learning of Setho's location outside of the city by the time he had already been there for nearly a month's time already. He begun his expedition, and along the way, managed to free several slaves. It was here where Senzesuole killed his first slaveowners; Merythaian men who sat on a porch observed Senzesuole carefully, as he had the look of a peasant but not of a slave, lacking the usual Zaentovi tone that most of them had.

Retrieved from "https://a-crowns-price.fandom.com/wiki/Senzesuole?oldid=10247"
Community content is available under CC-BY-SA unless otherwise noted.