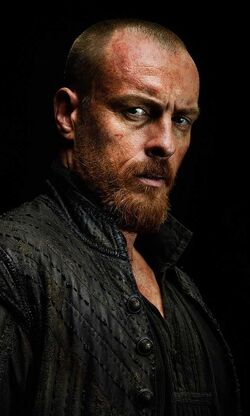 Rollick Karthmere (born September 13th, 315 AC) is a thin and frail man of House Karthmere, son of the great Tyralt Karthmere and brother to the late Allistair Karthmere. He is known for his immense knowledge in economical politics and investment prowess, beating out most of his house members in how to accumulate large wealth and income -- a fine achievement, considering the general economic prowess of a Karthmere in general.

Rollick was born with a disease causing his bones to be weaker than others, and his body was never meant for the fighting lifestyle of his father and brother. What Rollick lacks in physical strength, he makes up for in his mental strength. He is currently the Lord of the Treasury of the Upper Chamber of Lords.

During his early life, Rollick was sent by his father to one of the great universities of Thyllanor having him learn under some of the most intelligent men in all of Andoras. Despite the education he received there and the catering he was given as a Karthmere, he grew to despise his father for sending him away from his home and family. After reaching the age of twenty five, Rollick would travel to Thunder's Shore learning more about the worlds economics and affairs. After nine years he would return to Thyllanor were he was anointed the Lord of the Treasury, much to his father's disagreement, who was sure to make his displeasure known across the nation.

Serving under Dalan Karthmere, he made the nation richer than they had been since the days of the Loyal Lions, surpassing most Lords in his position before him; yet, with his age, his disease has worsened, and Rollick has a sickly look to himself, pale and worn. His body must be supported by a silver cane when he walks, and his hair is starting to gray at a far younger age than usual; most doctors who analyzed Rollick claimed he would be dead by or before age 30. Rollick continues on, though it is unknown what truly plagues him. Many jest about Rollick's appearance, some saying that he appears older than his father, despite being half his age. Some have also compared Rollick's symptoms to those of his father's in recent months, and some might say that Tyralt is developing the same sickness that Rollick has.

Retrieved from "https://a-crowns-price.fandom.com/wiki/Rollick_Karthmere?oldid=9374"
Community content is available under CC-BY-SA unless otherwise noted.