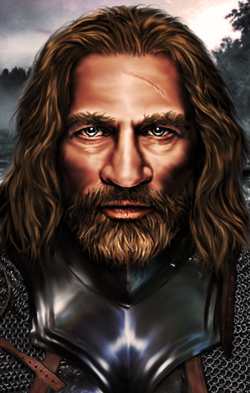 Season(s)
N/A
Titles
Highlord of Thyllanor
Also known as
Old Rich
What Nobilis Should've Been
Status
Deceased
Age
Died September 8, 218 AC (aged 62)
Date of birth
May 29, 156 AC
Death
{{{Death}}}
Origin
Faercrest, Thyllanor
Allegiance
House Karthmere
Thyllanor
Religion
Five Paragons
Family
House Karthmere
Portrayed by
N/A
Richard III Karthmere (156 - 218 AC) was a member of House Karthmere and Highlord of Thyllanor, best known for his superior leadership and guidance that made Thyllanor the most powerful realm in the Kingdom of Andoras during his reign. Inheriting the throne at only 3 years old after the assassination of his insane uncle, Nobilis Karthmere, he was unable to rule for most of his early life, with an Interregnum in place; a sort of ruling council of regents in his stead. When he finally did become highlord in 171 AC, the realm flourished, in a seemingly instantaneous fashion.

Richard was born May 29th, 156 AC to VIckent Karthmere, a younger brother of Nobilis, and a wife whose name was Amerè Goldarr, a member of House Goldarr from the Moonlyt Peaks. At the time of his birth, Richard was not immediately seen as a potential candidate for the realm, as the line of succession would go to any of Nobilis's children before Vickent or his son. Nobilis never had any children, however, and his reign was heinous in the short three years it lasted -- his death, both timely in some regards and untimely in others, marked the start of a new era for Thyllanor. Nobilis was seen as the culmination of several generations of Thyllanorian lords who longed for the return of a kingdom, not to say the least of the very recent War of the Lions between the Karthmeres and House Asmere. The frequent executions and violations of power committed by Nobilis, and the famous Five Day Doom in which Nobilis had a fit of madness and gave an order to slaughter everyone in Faercrest meant that following his demise, Thyllanor was in no position to accept another tyrannical and mad ruler.

Vickent was poised to become the next highlord, but an emergency council formed in the wake of Nobilis's lunacy threatened to rise up in revolt if anyone directly related to Nobilis -- that is, in his nuclear family, such as a brother in Vickent's case -- was to take the throne, believing that the madness could come to fester in another Karthmere so closely in bloodline to Nobilis. This council was the same that purportedly authorized an order to assassinate Nobilis, and it was backed by most vassals of Thyllanor at the time, so Vickent had little choice on the matter, lest he bring about a second War of the Lions -- which his brother had just came very close to doing while he was highlord. As an alternative, the crown was passed to young Richard at just over three years of age, on June 6th, 159 AC. Richard, only a toddler at the time, had little notion of his status as the highlord, and in his stead, his father was allowed to officiate as Richard's regent, a position he held for its entire existence, ceasing when Richard reached the age of majority on his birthday, May 29th, 171 AC.

Leading up into full reign, forerunner of Thyllanorian golden age

Throughout his childhood, Richard was often chastised for an attitude that many confused with noncompliance and laziness. Indeed, the young Karthmere was renowned for what some thought to be sloth, but it was later realized that Richard was naturally gifted to an extent that he felt most of his tasks and duties were not worthy of his time -- a highly haughty attitude, but no one complained when he brought the realm to new heights following its lowest depths. Richard had a natural aptitude for diplomacy, often greeting rulers in person cordially and treating them as though they were close friends. Although his talent for administration and stewardship was considered only average by future standards, one should not understate Richard's effectiveness with his guidance throughout the tumultuous times that Thyllanor had just faced in the past 30 years. He was neither for nor against Dragomyr rule, being a proponent of fair rule and righteous cause; another trait that Richard came to be known for, himself. He married into House Brackwater of The Wetlands, and by Aldas Brackwater's daughter Lenolea, had five children; Richard (who would later become Richard IV), Elenna, Rollick, Diano, and Tucephalla.

Outside of Thyllanor, Richard was selected as King's Hand by both Maregor II Dragomyr and his son, Draegon II on two separate occasions. His travels led him outside of Thyllanor often, but he had established an advanced system of messengers that could get from Dragonspire City to Faercrest in two days, using preplanned routes and making use of multiple horses and couriers along the way. This, combined with his effective council, meant that even while he was away, Richard's decree was never far. Though a strong central ruler, he was generous in his bequeathing of titles, and delegated power when he felt it was deserved.

When the 198 AC rebellion began, Richard was one of the highlords who abstained from the conflict, claiming it would pass over and Thyllanor was not particularly in danger of nationwide starvation. With many river sources and basins in Thyllanor, he was not wrong; though drought had become a prevailing problem at the time, it only affected places that were warmer and lacked the total river coverage that Thyllanor had. The Kingsland was the same way in terms of climate and status, but was attacked simply because it was the place of the crown and many had initally assumed the crown to be at fault falsely. He did, however, dispatch a Thyllanorian regiment to Dragonspire as a show of fealty, and also to support the besieged city when the Battle of Dragonspire struck in July of 199 AC. He would continue this pacifism until his death, and his stance on war rubbed off on some of his descendants, such as Malveus II; typically, however, these Karthmeres who agreed with Richard's point of view were not those in the position to inherit the realm, and as such did not have the perspective that someone on the throne would.

Later life, death, and remembrance of his reign

As Richard aged, he resigned from the position of King's Hand and spent most of his time in Thyllanor, only leaving occasionally when summoned by Draegon II. His later reign was notable for sparking what would eventually turn into the Thyllanorian government and the bureaucracy that arose from it; in reality, it started when the dangers of absolute monarchy were realized under Nobilis and progressed after his death, but Richard planted a foundation that would eventually be built on by his son Richard IV, his grandson Malveus II, and his great-grandson Vicede II Karthmere, whom officially brought the lower government into lawful existence upon his ascension. Richard was also tolerant of the principalities, and though he was staunchly opposed to con-crownism, claiming that birthright and inheritance was the only true way for a nation to flourish under a dynasty (this was taken with a grain of salt, as his uncle's actions had gone against this exact notion), he allowed the patrician and diplomat Tyno Greeves to establish a foundation at the Academia Faercrest, which eventually garnered a large deal of interest and curiosity. At the behest of the newfound organization, Richard dissolved the obsolete Margraviate of Farrowhalt -- an old title founded for military defense purposes when the Dragomyr invasion took place -- and allowed Greeves and his followers to establish two so-called principalities around the cities of Colburgh and Voyatia, in what is called Richard's greatest act of generosity, even to those whose political philosophies directly conflicted with his own. To this day, both the Principality of Colburgh and the Principality of Voyatia still exist on Thyllanor's southern borders, and even joined forces with Veddel Markwell and Michael Avleston under the Farrowhalt Freehold during the 326 AC rebellion.

Thyllanor enjoyed its longest reign under Richard; at 59 years, he directly ruled for 47 of them, and Thyllanor experienced a new golden age during and after his reign, only to be interrupted by the termination of the Daerod di Piazz and The Mournare Nights; events that would lead up to the 4th century AC becoming full of war and once-more uncertain times. Many comparisons have been made to the period leading up to Nobilis Karthmere's coronation and subsequent terrible reign and the foundation that was established for Dalan II Karthmere when he came to power; although the analogy is not far-fetched and pries at the fears and unknowns that existed in both times, comparing someone to Nobilis is akin to the worst insult in Thyllanor, especially when directed at a Karthmere. Some have used this as material to prophesy a second coming of a ruler as influential and great as Richard was, but as with all other things in the 300s AC, the future seems uncertain.

Dying on September 8th, 218 AC at the age of 62 from natural causes, Richard left behind a large assembly of loyal vassals and acquaintances from all over Andoras. His funeral, held three days after his son's coronation on September 15th, was one of the largest and most extravagant in memory. Following several weeks' mourning, Thyllanor continued on, but this time with a brighter future -- the Daerod di Piazz had just begun and would subsist for three generations after Richard's time, ensuring that, if perhaps fleeting, Thyllanor was a cultural power instead of military as it has been in recent years.

Retrieved from "https://a-crowns-price.fandom.com/wiki/Richard_III_Karthmere?oldid=10158"
Community content is available under CC-BY-SA unless otherwise noted.