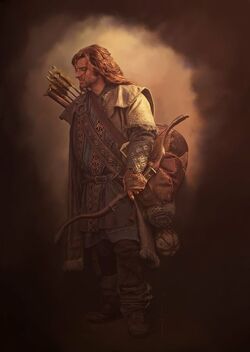 Season(s)
2
Titles
N/A
Also known as
The Drunken Seer
Status
Alive
Age
32
Date of birth
January 2nd, 316 AC
Death
{{{Death}}}
Origin
Owl's Rest , Gardoria
Allegiance
Varies
Himself
Religion
The Five Paragons
Family
N/A
Portrayed by
N/A
Morsen Holdfast (born January 2nd, 318 AC) is an often intoxicated seer/fortune teller residing in eastern Thunder's Shore. His main claim to prominence is successfully predicting the Civil War of Andoras in 340 AC, but at the time he was quite unknown and very few, if any listened to him.

Morsen was born on the second of January in a peasant's cabin within Gardoria. His stayed at home and his father always tried to farm and gather what they could to survive. Into his childhood, he realized he was blessed with the ability to see the future when he dreamed. Most of the time, it came true. However, in these dreams it seemed like nonsense but over time he was able to decipher the meanings behind the dreams. Later in life he set out to tell his prophecies to the public.

It was Morsen who dreamt the Civil War happening.  Sadly, most who heard his stories of dreams and war belittled, teased, and scoffed at him. Saying it were nothing more then a vivid nightmare. After the war had happened, people began to flock towards Morsen, asking for forgiveness and for him to tell more of his prophecies. Soon after he developed a following of people, he resides in Thunders Shore.
Retrieved from "https://a-crowns-price.fandom.com/wiki/Morsen_Holdfast?oldid=6750"
Community content is available under CC-BY-SA unless otherwise noted.