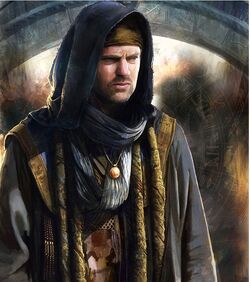 
Farrowhalt Freehold (after 326 AC)
Religion
The Five Paragons -- however, some claim he was godless
Family
House Avleston
Portrayed by
N/A
Michael Avleston was a diplomat, minor noble, writer, prophet, and visionary, mostly noted for writing the novel titled The Mystery of Salvation, and co-founding the Farrowhalt Freehold with his close friend Veddel Markwell. He is the less-noted of the two, but he contributed far much more to the cause, and felt more strongly of it. He, like Markwell, was executed the morning of January 27th, 331 AC, and with their deaths was dealt a serious blow to con-crownism. It is believed in his life that he wrote over five hundred letters and novellas pertaining to the ideals of reason and democracy before he died.

Michael was born Michael Titus Avleston, the third son of James Avleston, who at the time was in contention for being the elected family member of House Avleston to rule the Free City of Emeleth, a title that has been in the Avleston line's hands since the title was created in 98 AC. Michael was sickly as a young boy, but grew to beat his infirm nature. This sickness, however, meant his other siblings excelled while he was forced to remain bedridden most of the time. As a result, Michael was never seriously considered to be an apt ruler; his other two brothers, Gregory and Relman, were both well into their own facets of life by the time Michael was able to definitively say he was no longer constantly ill -- roughly about the time he was 13 or 14. When James Avleston was elected to the office of Baron within the Free City, Gregory was proving himself to be a martial-minded leader, but lacked in administrative and diplomatic sense. Relman, on the other hand, was a jack of all trades, but a master of none. It would be Michael, then, who would fill in these gaps, later proving to be nothing sort of a genius. His father, however, did not see this in him.

In 300 AC, when Michael was 16, he asked his father for a holding within the city. His father's reply, however, was that of disdain. Both older sons had already been given land, and Gregory had personally been given James's nomination for the next Baron of the Free City. Michael was turned down, but instead of leaving home or self-exiling himself, he decided to dedicate his life to learning everything he could, whether it be the names of Zaentovi chieftains or the price of imported Thysian euralaya in a specific year; whatever he found interesting, he got his hands on, which his father approved of, if only lightly. What interested Avleston the most, however, were the politics of southern Doras Edrossi post-Dragon Wars -- particularly, the early founding of the city-states and the Con-crownism movement, which had been brought to Thyllanor before in the 180s AC by Tyno Greeves, and was actually was responsible for the founding of the two unique principalities of the Lord Paramouncy; those being the Principalities of Colburgh and Voyatia. Already, Avleston was finding a comfortable world to fall into; one where he would be judged on his ability to act in the present, and not one where he was judged for things he could not control, such as his inability to do much of anything in his early childhood.

As a result of this, Avleston was also very introverted and kept to himself most of the time; he found reading to be a very enjoyable pastime, where it was just him and the stories, both factual and fictional, of the world of Drakonius. His brothers continued to be taught in their own way, shedding their personal tutors in favor of specialized teachers who would guide them further in the paths they chose, but Michael had never received a personal tutor. He was content to learn on his own, and flourished as a result.

Michael was consistently teaching himself the ways of politics and diplomacy for 10 years, from when he was 16 until he was 26. He never again came to his father with a request for land during this period, eager to try and impress his father and perhaps earn his respect over his two older sons, who were proving to be decadent in their duties. In 310 AC, Michael decided to go to his father, now in old age, and request once more a holding in Emeleth -- this time, in far more eloquent language. Even more furious than before, James Avleston claimed he was greedy and demanded that he be content with his lot in life.

Michael's work to teach himself and rise in his own family had failed. More grieving than angry, Michael decided to impose a self-exile on himself, and announced to all of his family that he would be leaving to find his own path. His brothers and fathers did not particularly care, which only served, in Michael's mind, to prove his point. Knowing what he knew then, he decided to travel south, to the modern-day Principality of Colburgh (then part of the Margraviate of Farrowhalt), and there he sought his future. By now, Michael had already begun to write treatises and pamphlets; something he would become famous for later in life, when his grief finally subsided and his spiteful anger was the only thing that remained.

Avleston was prone to taking out his anger -- not on his own family, but on the things he saw as wrong, and this included religion. It is said that in 314 AC, while writing what would later become The Mystery of Salvation, he walked into the chapel of a north Kingslander hamlet and destroyed all of its relics, claiming they were 'not proper renditions of the Paragons'. His views softened as he got older, but he always seemed to practice a sect of the Five Paragons distinctly different from the mainstream views of the Pentarch, something akin to iconoclasm.

In 315 AC, Avleston found a job as the steward of the Duchy of Ashamy, but it is not known when he left this job, or even what it truly entailed. He reportedly made a trip to the City-State of Lavos, where he met with the venerable and dying Victor Damius for his approval and guidance -- Victor saw him as a bright young man, but warned him that he was going to be disappointed in his pursuits, claiming that the world would be plunged into warfare sooner or later, and that Andoras was inherently against con-crownist beliefs and the alien doctrines of Doras Edrossi. Avleston took this advice to heart, but did not heed Damius's warning; he fervently believed that there was a possible solution, and he would work to reach it, traditionalists be damned. In the same year, Avleston disappeared from society, and was not seen again at large for four years.

In 319 AC, Avleston re-appeared, and suddenly published several literary works, many of them controversial and/or philosophical, usually due to their general nature of political commentary. It is usually agreed upon that in this four year period, Avleston went incognito and returned to his practice of reading and writing, taking some time to gather his thoughts. Suddenly, he was much more militant in his beliefs, and rather arrogantly believed he had an answer for everything. The next year, in 320 AC, he and Veddel Markwell met by coincidence when Avleston was travelling through the county of Leichon, vassals of the Duchy of Morano in southern Thyllanor. Markwell had been working just a bit due south before then, as a diplomat in the county of Adellanor. He was famously exiled by the ultra-nationalist Vincent Dyrebolde, who removed everyone from his court who wasn't born and raised in the Kingsland proper. The two talked, and soon realized they agreed on many things. Avleston had arrived at his conclusions through dedicated self-study, while Markwell had picked them up through collaborating and consulting with his classmates at the Academia Faercrest. Both agreed that change needed to be brought to the world, and both agreed that the ideals of monarchy were weak at best. Although Avleston firmly held his beliefs through what he saw as his own injustices being proof, Markwell was still somewhat unsure, and it took some convincing for him to completely come on to a united front with Avleston.

Michael, at this point, had notably been considered eccentric by many lords, and his greater political ideologies betrayed the trust that they had reluctantly invested in him. Many first impressions made him out to be a Godless democrat with a penchant for aggressive conversion, but Avleston hated this about his persona -- this, in turn, also fueled the drive for his con-crownist beliefs, and his ultimate quest to prove his doubters (particularly his family) wrong.

Arrest and time in prison

In 321 AC, however, Avleston's relatively brief time collaborating with Veddel Markwell ended abruptly when he was arrested on January 12th for reportedly disturbing the peace. Eyewitnesses reported that Avleston was loudly proclaiming the benefits of con-crownism for the better portion of an hour, to a crowd that was rather inattentive. Guards, however, picked up on the message of the speech and took it as an insult against Aegor IV Dragomyr, the current reigning King of Andoras.

Retrieved from "https://a-crowns-price.fandom.com/wiki/Michael_Avleston?oldid=9386"
Community content is available under CC-BY-SA unless otherwise noted.