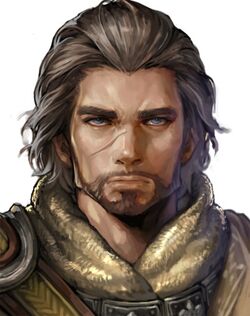 
Aarigo (brother, fellow bandmember)
Portrayed by
N/A
Merell Cerynai (319 AC - ) is a bard, luthier, composer, songwriter, poet, and author, born in Ceryne. He is a Lavosi-Drakonian quadroon, with the Lavosi blood coming from a recent ancestor. This is said to give him his dashing looks.

Merell is a son of a bastard, and holds equal status as his father does -- however, his captivating voice and instrument-playing has lessened the stigma against him. Merell is known for experimenting with his sound, and this is one of the reasons why he is so renowned.

Little is known of Merell's early life. Any questions he's been asked about his personal life are usually asked through the persona of Drakus Daydreme, his alter ego and performing name, which has led to satirical, yet often taken-as-true results, such as a misinterpretation that Merell was actually 'a nocturnal vampire, who's been playing string since the earth was young'. His ability to weave stories about himself leave behind only bizarre memories of his passing, and from town to town everyone who recalls Drakus Daydreme can cite several impossible things about him, all differing.It is known that he played an instrument when he was young, starting from age four; his father, Eregio, was a lute player himself, and taught Merell, thinking him to follow his example. After picking up some basic tones and chords, Merell continued to practice, often busking on the streets for money alongside his father. He earned enough to attend a local academy, and trained with a professional musician there, who taught him instruments such as the harp and harpsichord, the viola, and the piccolo.
Retrieved from "https://a-crowns-price.fandom.com/wiki/Merell_Cerynai?oldid=9411"
Community content is available under CC-BY-SA unless otherwise noted.