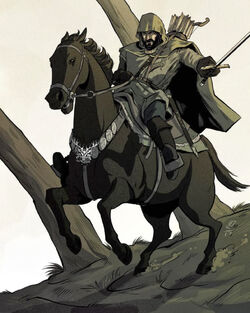 
His vassals, subjects, and allies
Religion
The Five Paragons
Family
House Dermond
Portrayed by
Marcus Renmark
Marcus III Dermond is the current Highlord of Gardoria, and he rules from his seat of Elkwood. He is known as an honorable man, raised with a sense of chivalry and a natural compassion for those who look to him as a leader. As a Gardorian, his people are known for their neutrality, and their isolationist tendencies compared to other realms or houses. However, this doesn't make Marcus weak, nor does it make his House weak; although the Dermonds tend to stray from war, they are a very vengeful people and still hold grudges from hundreds of generations ago.

Marcus was born to Ethan Dermond and Jana Ulvert on a the dark night of April 15th, 314 AC within the castle of Elkwood. Marcus grew up to be a quiet boy, but had a knack for archery. As the years went on, Marcus grew into a tall man with his black hair flowing down his back. He is well spoken and intelligent, but mostly keeps to himself in external matters. His fighting skill is renowned in all of Gardoria -- his talent with a bow near legendary, to the point where some say he can shoot a coin tossed into the air. He is certainly agile for a man of his stature, but he is somewhat short compared to his peers, and more stout. This comes to his advantage, however, as great core strength is needed to use his bow, the ancestral weapon Stagsplinter.

Marcus nearly refused to join the 346 AC rebellion, citing his common stance of neutrality and loyalty, but after some convincing, Gardoria joined on the rebel's side when they felt they had joined the victors, and only participated in one major battle the entire war; the Second Siege of Dragonspire. They had officially joined the war effort beforehand, and intended to send their troops to aid in the First Siege; Marcus, however, was not present. At the same time that the First Siege was occurring, Edranish loyal to the Crown were attacking their southern borders, as well as Thunder's Shore, and were attempting to breach their woodlands. Marcus led the fight against these men, utilizing guerilla tactics as well as higher ground. Over a course of several months, a combined Gardorian-Shoreman offensive managed to push back the Edranish all the way back to their capital of Coil. This southern campaign was nearly ruined by the massive army led by Daemalor Celtheon, but it was diverted at the last moment to attack the city of Corcivaetas and utterly destroy it. When the Edranish finally amassed enough soldiers to pose a threat, the Gardorian-Shoreman army returned, this time engaging in the Battle of Stebal, and killing their lord Diras Tyseth after a five day battle. Marcus then turned down the offer of occupying Edrane, and left it to his men and the Grimolts while he rode to assist in the Second Siege of Dragonspire. The rebel side then negotiated a white peace with Edrane, and from then on they no longer served in the war at large. Marcus still ordered his men to keep watch on the southern border, in case the Edranish attempted anything that breached their treaty.

When the war ended, the Gardorians that occupied Edrane quickly left and returned to their homeland. Marcus was part of the committee that approved of the Treaty of Dragonspire on November 3rd, 348 AC. After this event, he's remained mostly in Gardoria ever since then, usually meeting with the Gardorian council to discuss matters of the outside world. Despite their long-term animosity for House Grimolt that lingers to this day due to the Ironwood War, the two formed a trade alliance in 349 AC, in the heat of the War of Embers. In truth, Marcus still recognizes the Shoremen as a threat and rival -- he just simply sees the Thyllanorians as a bigger one, and is willing to work together to eliminate their common enemy. As of the present, he has not made any inclinations to war, but has publicly announced that he will go to war with Thyllanor should they bring the War of Embers into his country's lands, in an attempt to avoid another Massacre of Riverbay from happening.

Retrieved from "https://a-crowns-price.fandom.com/wiki/Marcus_III_Dermond?oldid=10106"
Community content is available under CC-BY-SA unless otherwise noted.