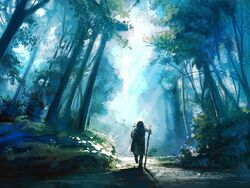 Season(s)
N/A
Titles
N/A
Also known as
N/A
Status
Deceased (Executed)
Age
Died March 8th, 333 AC (aged 39-40)
Date of birth
Late 293 AC - Early 294 AC
Death
{{{Death}}}
Origin
Crownsprice, Kingsland/Ember's End
Allegiance
Himself
Michael Avleston and Veddel Markwell
Religion
The Five Paragons, but possibly godless, as many con-crownists were
Family
None worth mentioning
Portrayed by
N/A
Manuel Fortwit (293/94 - 333 AC) was a semi-famous Kingslander con-crownist, in the entourage of Veddel Markwell and Michael Avleston during their demonstrations and travels. He is most famous for being quoted as stating, "I'd argue that little boy Dalan'll be just another rich bastard with a crown. A lot of us don't want to wait to find out." He made this statement after learning of Dalan II Karthmere's birth, discontent with the current state of affairs in Thyllanor. He had lost faith in Dalan I Karthmere guiding the revolution, and depended entirely on Markwell and Avleston to deliver them to salvation. Travelling with the Lord Paramount himself on a journey across the free territories of Andoras, he quickly began to despise the man and imagined his son to be the same way, if not worse.

Little else is known of Manuel, except that he was put on trial in 331 AC alongside Veddel Markwell and Michael Avleston, but unlike those two, he and several other men in their entourage had delayed executions until two years later, during which time they spent in an oubliette and some of the worst destitute conditions possible. Manuel, never one to be unquotable, apparently said that death was a freedom after their treatment. He was executed by hanging.

Retrieved from "https://a-crowns-price.fandom.com/wiki/Manuel_Fortwit?oldid=9414"
Community content is available under CC-BY-SA unless otherwise noted.