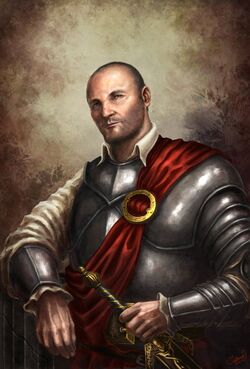 Season(s)
N/A
Titles
Duchy of Delathane
Also known as
Malveus of Vicarshall
Malveus the Bastard
Malveus the Wanting
Status
Deceased
Age
Died November 2nd, 345 AC (aged 62)
Date of birth
August 16th, 283 AC
Death
{{{Death}}}
Origin
Unknown, possibly Vicarshall, Thyllanor
Allegiance
Only himself, at one time
House Karthmere, Thyllanor
Religion
The Five Paragons
Family
House Karthmere (bastard)
House Landrocaster
Portrayed by
N/A
Malveus Landrocaster (283 - 345 AC) was a bastard child of Malveus III Karthmere, and attempted, but unsuccessfully tried to wage a succession coup against his younger half-brother Dalan I Karthmere for the throne of Thyllanor in 310 AC. If Malveus was legitimized, he would have been first in the line of succession, beating Dalan in age by five years. The war was sparked by jealousy and a lack of perceived attention, something that Malveus particularly hated for the family he had been born into.

Malveus never acted out under the pressure, however, and survived with a five-year imprisonment after his loss, being released early for good behavior. From 315 to 319 AC he lived in Faercrest, dwelling in the court of his brother and assisting him with the military matters, temporarily even being appointed Marshal of the Armies until he resigned. He was given a cadet branch, named Landrocaster, in 320 AC, and was even granted land towards the end of his life before dying at the age of 62 from a hunting accident. He was Duke of Delathane from 336 AC until his death in 345 AC.

Malveus had children of his own, and a cadet branch of House Karthmere, House Landrocaster, was formed as a result. He has one son and one daughter; Richard Landrocaster and Vele Landrocaster, born in 322 and 323 AC respectively. His son, Richard, is expecting a child, which would make Malveus a grandfather.

Retrieved from "https://a-crowns-price.fandom.com/wiki/Malveus_Landrocaster?oldid=9381"
Community content is available under CC-BY-SA unless otherwise noted.