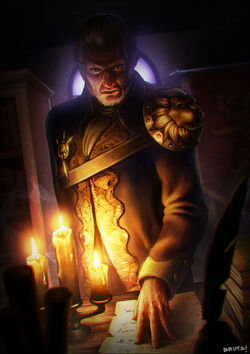 Season(s)
1
Titles
Overseer of Thyllanor
Regent of Thyllanor (former)
Also known as
Ol' Rawhide, the Diplomat, Duverius
Status
Alive
Age
61
Date of birth
May 2nd, 289 AC
Death
{{{Death}}}
Origin
Dormendell, Thyllanor
Allegiance
Himself/The Karthmeres/Thyllanor
Religion
The Five Paragons
Family
House Markwell
Portrayed by
N/A
Malric Markwell is a famous diplomat, writer, poet, overseer, spymaster, and steward, in the service of House Karthmere and the Lord Paramouncy of Thyllanor. He is known for his revolutionary, almost untouched ability for diplomacy and intrigue, and is said to have the sharpest tongue in the whole of Andoras. His older brother, Veddel, was one of the main belligerents in the Farmers' Revolution alongside Michael Avleston and Dalan I Karthmere, and a fine diplomat himself. He is currently the Overseer of Thyllanor, and head of the Upper Chamber of Lords in the Thyllanorian government. Should the Lord Paramount be incapable of ruling, the Overseer would also become the regent, and already Malric, alongside Tyralt Karthmere, share something of a co-viceroy position which they have held in Thyllanor since the 320s AC.

Malric was born in Dormendell, Thyllanor on May 2nd, 289 AC to Duverius Markwell (262 - 314 AC), a painter and architect, and Marella Crewdell (261 - 293 AC), a midwife. He, alongside his older brother Veddel (286 - 331 AC), enjoyed an easy lifestyle, never in danger of poverty with his father's ludicrous business and his mother's tendency to take care of royal children and their mothers. His time with his parents influenced his decision to become a diplomat later in life; his mother would learn first-hand how royals acted in their most private moments and would relay the information to her sons, and his father would know what pleased royals, especially when they had an audience to encourage or entertain.

Knowing how the aristocratic mind worked, Malric was keen to develop this skill from an early age, and took up research on it when he was barely a teenager. He was overshadowed, unfortunately, by his more talented and older brother Veddel, who reportedly did not study or analyze any documents regarding diplomacy and still did far better than his peers. Malric was quite bitter about this, and was jealous of his brother and the attention he received all through his life until his brother's execution in 331 AC.

Malric began to advise Dalan I Karthmere in 319 AC, taking up the position of Overseer just a few days shy of his 30th birthday. Since then, he has consistently been the Overseer, and has hardly been absent from his position since his appointment. While the young Dalan II was growing up, Malric was the primary regent for Thyllanor, and some say that he ruled the paramouncy better than most Karthmeres ever had. Because of his sense of duty and his desire to restore his family's name as a result of his brother's failures, Dalan decided to keep Malric as Overseer after he ascended to the throne and was coronated. Malric was also responsible for figuring out who Foran Hills was during the Bloodmoon Riot, and discovered where he was hiding the morning after. This dedication has kept Malric a 31-year veteran of a title that was once considered easily expendable in Thyllanor; overseers came and went, but in present day, Malric remains.

Retrieved from "https://a-crowns-price.fandom.com/wiki/Malric_Markwell?oldid=9407"
Community content is available under CC-BY-SA unless otherwise noted.