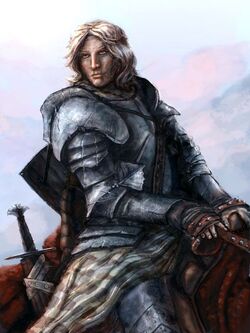 Born in the Dragonspire, his father was the spymaster for King Aeramor Dragomyr, which landed him quarters within the Dragonspire growing up. Of Drakonian descent, Maerys fits in with the Dragomyr's court well, being trained by the court's martial instructor, eventually coming to join him. After he was granted Knighthood, Maerys Trevelyn would serve in the Dragonspire as another instructor, charged with martial training for many sons of the court nobles.

Maerys Trevelyn was a famed fighter, participating in many tournaments alongside Taeronys Dragomyr and providing a fair contest, winning a few himself. So well liked as an instructor, he was even requested by allied vassals within Andoras, most notably by Dessar Tyseth to train his son Cyrin.

Maerys fought in the field alongside Taeronys Dragomyr, Daemalor Celtheon, and the rest of their knightly retinue. His main priority was helping protect the Prince, but he had a fair share of combat and him and Daemalor would help Taeronys back to Dragonspire. He would flee with Taeronys and the rest of their knightly retinue to the Dragomyr Villa, where Taeronys would name him the Lord of the Dragonshroud, a newly formed order of Knights similar in fashion to the King's Shield dedicated to protecting the Villa and Taeronys.

Maerys has a typical, attractive Drakonian appearance, chin-length white hair stained with blonde and the telltale silver Drakonian eyes. During the Second Siege of Dragonspire, he gained a few notable scars including one that ran over the left side of his lips, serving to add salt to the claims of Maerys' combat prowess. His former armor also has many scratches, cuts, and dents, none of which had been repaired as the set now rests hanging from an armor dummy in his quarters. He now wears lordly Dragonshroud plate, the only difference from the normal knightly plate being a gold trim and a helmet with more regal plumage.

Maerys is known as a just, level-headed individual that held little attention for luxury and lechery. His appearance was once a cause of insult, many claims of being a pretty-boy had infuriated the Knight, as he had failed to gain any scars in his numerous tournaments and bandit raids. After the Second Siege of Dragonspire, he was relieved to discover that he had scars along his face and his skin was no longer Drakonian and smooth, feeling it gave legitimacy to his claims as a veteran warrior.

He values martial prowess and respect, holding contempt for the lecherous and bon vivant. He is not known for chivalry or honor, but it is common knowledge that he values the code of Knights and is not one for deception.

Retrieved from "https://a-crowns-price.fandom.com/wiki/Maerys_Trevelyn?oldid=9465"
Community content is available under CC-BY-SA unless otherwise noted.