Start a Wiki
Lilly 'The Maiden' 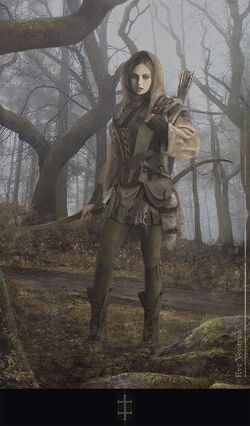 Season(s)
N/A (Lavosi Gang Wars)
Titles
None
Also known as
'The Maiden'
Status
Deceased
Age
Died May 9th, 272 AC (aged 47)
Date of birth
February 8th, 225 AC
(her own estimation)
Death
{{{Death}}}
Origin
Lanka, Thysia
Allegiance
Broken Cloaks
Religion
The Five Paragons
Family
N/A
Portrayed by
N/A
Lilly 'The Maiden' was an assassin for the esteemed gang known as the Broken Cloaks. She was one of the best assassins of her day, known for using her charm, wit, and skill in archery to dispatch her targets. She met the Odd Three -- Jorry 'Lavos', 'Ser' Garryt, and Kallum Resno in 241 AC during the last months of the Lavosi Gang Wars, and was later present during the Efugian Massacre on January 14th, 242 AC. Following the Lavosi Gang Wars, she was instrumental in reforming the gang, and was promoted to a Master under the persistent Grandmastership of Kallum Resno for 14 years, from 251 AC to 256 AC, and then again from 263 AC to her death in 272 AC.

Lilly is famous in contemporary history for being a strong, heroine-like figure; figures that were severely lacking in most historical records. She kept several journals over her life that survived the Gang Wars and her adventures, which gave a direct look into her unique life, and the life of other figures during her time.

Despite her direct attacks against a nation's government, the rampant killing of hundreds if not thousands, and having views that would be reputation-shattering for any woman to publicly admit to, history is willing to look beyond all that and cite her tenacity in the face of massive odds and utter defeat -- especially at such a young age -- and encourage young female nobles to look up to her as a potential role model. This is especially in rural regions, where peasant and noble girl alike can aspire to be like her; in Gardoria, this is most prominent, where not only equality but marksmanship are both praised.

Lilly was born to peasant parents and raised in the town of Lanka, a heavily populated slum town of Lavos and Thysia. The town sat directly on the Lavosi-Thysian border, and Lilly was born on the eastern side of the border, making her a Thysian citizen on birth (several city-states practiced jus soli). Despite this, she moved west to Lavos, particularly the city itself, and lived there as a young teenager. She is quite remarkable as far as peasant girls went; she was able to fend for herself and said that she taught herself how to fight through situations in which she would get cornered by peasant boys trying to make unwanted advances towards her. Her father was said to have died 'five summers after her birth', but that her mother continued well into old age and Lilly would often visit her until Lilly's own death in 272 AC. Her mother outlived her, but it is not certain when she died.

She was discovered by Jorry 'Lavos', Kallum Resno and 'Ser' Garryt in late November 241 AC, during one of the final conflicts of the Lavosi Gang Wars that would take place directly in the city of Lavos. She was being cornered by several guards, and the Odd Three helped dispatch them in time. At this time, she was around 16 years old, yet was still able to hold her own; this impressed them, and she was offered a place in the Broken Cloaks when the fighting died down. She was not viewed as a very valuable member, however, until she was sent out on an assassination mission in mid-December that many viewed as impossible, given that the Broken Cloaks were losing land fast by way of the Lavosi government. At this time, the Cloaks also had no holding in the city itself any longer. She returned with not only the head of one diplomat, but three; two others who were also marked for death but not officially targeted in any missions by the Cloaks. Jorry had realized that she had somehow sneaked her way past the Cloaks' guards, found a ledger containing targets, and had gone on her own whim to attack the other two, despite not being required to do it -- nor had anyone known she had taken it up until she brought their heads back, as well.

Seeing this, Jorry was not angry, but instead suggested that because she was able to think for herself and act in the interests of the Cloaks, he offered her the ranking of Elite on the spot, to which she graciously accepted. Many started drawing comparisons of her ascension to Jorry himself at this point, as he had risen to the rank of Elite in such a manner; although, not nearly as quickly as Lilly had. She then began taking on others with her on assassination missions before realizing they were more a burden to her, and despite being an elite, still stuck to the same old assassination assignments she had received in her relatively short time as a Broken Cloak.

In the short time that she knew him, she also befriended Celomar, and he became something of a father figure to her. Whenever she needed counsel, she would often contact Celomar first, then Garryt, and finally Jorry and Kallum. She continued her missions with a proud sense of duty (and also because she wished to express her gratitude for being saved), but it was little use. The Cloaks' main force had been pushed out of the city once more just three days shy of the new year, and fought a retreating battle all the way to the east in Efugio, where most of them would be killed just over a week later.

The Efugian Massacre and end of the Lavosi Gang Wars

On January 12th, 242 AC, disaster struck for the Broken Cloaks as half of the Lavosi army, totalling around 10,000 men, marched for the northern Village Territory of Efugio, where there had been many Broken Cloaks sympathizers. The government of Efugio personally condemned the war spilling over into their borders, but they dared not interfere for fear of losing what little of a standing army they had.

This was the last month of the war, and Efugio was one of the last bastions of the Cloaks; in Lavos itself, they had very few holdouts remaining. At this time, Jorry, Garryt, Kallum, Celomar and Lilly were all in Efugio; their headquarters had been moved there following the expulsion from the city that ultimately happened on December 28th, 241 AC; this was also a moment of great pride for the Lavosi, as they had gotten rid of the Cloaks just 3 days shy of the new year.

Hearing of the massive army heading their way, the Cloaks rushed to build what defenses they could, but it was not enough. The Efugian bastion was overrun with ease on the 14th, and most of the gangsters there were killed in retaliation; among them, Celomar, who was run through right in front of Lilly. His death struck Lilly quite hard, and the father figure in her life had been killed before her eyes. She did not often show it, but the terrors of war and combat had scarred her for life.

It was not easy, for Lilly or for anyone, to pick up the pieces after the bastion had been overrun. One final push into the city was attempted in late January, but the men were demoralized and worried for their own lives. On February 1st, the Gang Wars were declared over, with the final assault on Lavos being quelled and the Cloaks, the Shattered Brotherhood, and the Caravan of Wonders all crushed. It would take a miracle for any of them to return -- and only one of them would return, thanks to Lilly's efforts.

Lilly was instrumental in restoring the Broken Cloaks following the Gang Wars. Even though Victor Damius and the government of Lavos had made clear their intentions to severely crack down on gangs and gang-related activity, she and the Odd Three relocated what little remained of their membership, and moved to her home town of Lanka, where they conducted operations outside of Lavos. In 242 AC, they managed to regain some of the numbers of their membership, and managed to plant themselves firmly in the city, where poverty was rampant and several people were looking for an 'alternative' way of life.

The next following years involved targeting powerful diplomats from every nation and taking them out, looking at those who particularly interfered with the Cloaks' interests. By 244 AC, Jorry and Garryt had made the decision to attack Victor Damius himself. They died, and Kallum Resno took over the reins as Grandmaster, with Lilly as his second-in-command.Lilly had always suspected something was odd about the deaths of Jorry and Garryt, as two masterful assassins would not allow themselves to slip into a trap so easily. She had always kept a private thought that Kallum was responsible, but seldom told anyone, as she didn't know who to trust after their deaths. She considered leaving her life behind and starting anew, but Kallum convinced her to stay, saying he needed her now more than ever.

During their hard times, Kallum and Lilly came together as close friends; after she was able to move on from Jorry and Garryt's death. They became involved romantic partners later on, and they were married in an unofficial ceremony on March 25th, 251 AC, in northern Ceryne. The marriage was not fruitful, and reportedly not happy -- while it seemed to remain as a loving relationship for at least five years, it soon turned manipulative in Kallum's favor, something that Lilly did not appreciate. The verbal abuse soon turned to physical, and after five years of dealing with it, Lilly had had enough and wounded Kallum, cutting him from shoulder to hip with a machete. The wound missed his heart by mere centimeters, and nearly killed him from blood loss on its own. Coming to, he demanded her immediate exile from the Broken Cloaks, and stripped her of all rankings she had once obtained. She was once again on her own; something she had not been accustomed to since she was a teenager.

For some time, Lilly wandered around Doras Edrossi, lost with no sense of real direction. Leaving Lavos, she journeyed through the Village Territories, never truly setting down in one place. She ended up in Ethryke, and spent most of her exile there.

Retrieved from "https://a-crowns-price.fandom.com/wiki/Lilly_%27The_Maiden%27?oldid=9387"
Community content is available under CC-BY-SA unless otherwise noted.