A Crown's Price Wiki
Register
Don't have an account?
Sign In
Advertisement
in: House Brackwater, The Wetlands, July births,
and 5 more

View source
watch 01:54
Obi-Wan Finale - The Loop
Do you like this video?
Play Sound
Lainn Délámhoin 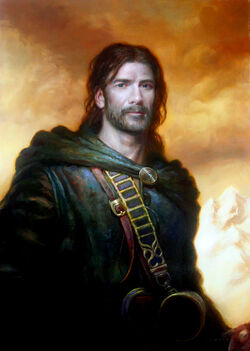 Lainn Délámhoin was a member of the Délámhoin family and the youngest brother of Rolland and Haythem Délámhoin His oldest brother, Rolland, is the Lord Paramount of The Wetlands, and Haythem is the Lord of Garanide. In life, Pelagius never held any official landed titles, which makes it all the more puzzling why an assassin would target him. In 350 AC, he died due to suspicious circumstances; his brother Haythem has been accused of his murder, although he fully denies it.

Pelagius was a hunter and courtier, and had three children with a commoner wife. He fought for the Kingdom of Andoras in the Civil War, as an archer in the Wetlander Army. As a result of being last in line to the throne, Pelagius was never seriously treated as a noble. He reportedly was content with this, however, and was in no threat to either Rolland or Haythem when he died.