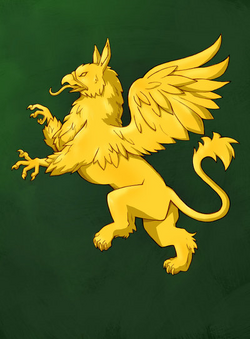 House Tyseth is one of the ruling great houses in Andoras, reigning over the Princedom of Edrane.

It is speculated by historians that House Tyseth is of a pure lineage of the Edranish migrants from Edranea, as their skin has remained less tan than their kin, who widely interbred with Andorasi settlers, whose skin burnt in the Edranish sun. Their brightly colored banner displaying a Gryphon, a creature that's existence itself is pure speculation as they've never been seen in Andoras, is further reason for this speculation. However, there is little more evidence than this, and it is possible that House Tyseth simply adopted more northern Andorasi customs and that the gryphon is a result of imagination and legend.

The first named Tyseth that was recorded is Tanner Tyseth, who built a county on the northeastern coast out of several castles and a couple major villages. Little is known about Tanner's lifetime or actions, but he is considered the founder of House Tyseth as the first known member.

The County of Tynor was one of the many that signed the concord to form the Council of Day and align the Edranish counties, and is implied to have had great influence compared to the others.

In the Great Election, Deyn Tyseth was elected to become King of Edrane. As a result, the rest of House Tyseth secretly arranged for the forging of the Greatsabre Barrenblade as a gift. Also, Deyn and his House had a throne forged, dubbed The Winged Throne, a magnificent golden throne with huge, feathered wings gracefully extending upwards from either sides of the throne. This is meant to symbolize the ruler as a gryphon, or a prideful beast to be feared and respected, aswell as further incorporating House Tyseth's colors.

King Deyn Tyseth was mostly known for his creation of the Army of the Sun, a large mercenary force that he provided to the Thyllanorian Kingdom, creating a pact between Edrane and the Empire to ensure peace. His rule lasted more than fourty years, and is widely revered in House Tyseth as their own personal paragon, dubbed Peacemaker.

House Tyseth had a serious feud with another noble House, House Cane, and it is said to have nearly boiled into a civil war. King Marron Tyseth IV resolved the feud by incorporating a Blessed Marriage between the two houses, pairing Rollard Cane and Allis Tyseth.

King Seren Tyseth II organized a concord with the conquering Dragomyrs, swearing title-fealty and providing the Army of the Sun to them. This put Edrane into the Kingdom of Andoras on the map, and drew a fealty tax, but otherwise Edrane held it's autonomy. Seren Tyseth adopted the title Prince, which made him Prince Seren Tyseth I.

Prince Dessar Tyseth remained loyal to the Kingdom of Andoras, declaring war on the aggressors and recalling the Army of the Sun from Doras Edrossi, providing it as well as the Sun Fleet to the Dragomyrs. However, later in the war when Edrane's home forces were defeated at the Battle of Stebal, where Diras Tyseth met his end, Prince Dessar negotiated a surrender, the terms demanding that Edrane pay 2000 sovereigns, and recall the Army of the Sun back to Edrane.

Retrieved from "https://a-crowns-price.fandom.com/wiki/House_Tyseth?oldid=9579"
Community content is available under CC-BY-SA unless otherwise noted.