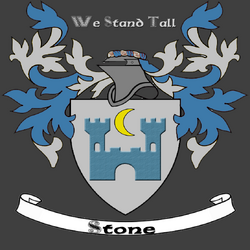 House Stone (also known as House Stelmont or Clan Stelmont in older sources) is an old Great House which has remained the de facto power in the Moonlyt Peaks for at least 400 years -- prior to that, they were part of the fabled 'builder clans' of the Stelmont culture, the most powerful clan of that designation, and later on had reunited the Moonlyt parts of the mighty Moonlyt Empire forged by Garnder Golemont after his death, which stretched from the modern-day borders down to western Gardoria.

Under House Stone, the Moonlyt peaks withstood four years of assault from the Dragomyrs in their invasion, but like all other kingdoms on Andoras, they eventually surrendered and accepted subjugation, which happened in 8 AC -- the Northmen of Frostfall also surrendered simultaneously, and then Draegon I Dragomyr concluded his conquest in Andoras, peacefully vassalizing Edrane in 10 AC and forming the aptly-named Kingdom of Andoras. The line of the Stones has remained unbroken since the days of their first clansmen in the Third Era, and a very famous myth in the Moonlyt Peaks is that the ancestors of all the major Moonlyte clans met with the so-called Moonlyte Goddess, who bestowed upon the migrants her blessing and bequeathed the land to them and their progeny to prosper for eternity. This story is mostly denied as hearsay these days, as The Five Paragons has become the dominant religion and denies any such goddess or deity's existence. This was further spurred by the state conversion to the Paragons following the Stones' unification of the Moonlyt Peaks, in order to better relate to and ally with the other Andorasi to the south. However, particularly in the north and in the mountains, there are some who still recognize the Old Beliefs, and with it, the divine mandate given to the Stones to rule as the Moonlyte Goddess's chosen people.

Whatever the case, the Stones rule the Peaks firmly, but without much needed effort; everyone recognizes them as the rightful rulers of the Peaks simply through longevity alone, and any faults to their reign are mitigated by the fact that they've brought prosperity and independence through the Peaks through creating security by forming strong alliances, particularly with Thyllanor, and joining the 346 AC rebellion to overthrow the Dragomyrs they once had bowed to three centuries ago.