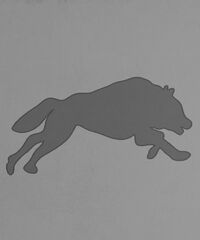 
House Silverfall
Religion
Old Beliefs
Military strength
Strong; around 25,000 men, can be higher
Cadet branches
House Aldwulf
Date of founding
Prehistoric
Age
10,000+ years (often considered the oldest great house in Andoras)
Founder
Lord Balor Stenwulf
Ancestral weapon
Winter's Howl
House Stenwulf is one of the great houses of Andoras, ruling in the northernmost region of Frostfall. The current head of the house is Lord Edward Stenwulf. It is one of the oldest houses in Andoras, ruling from their seat of Winterborne for centuries. Their other holds are Wolf's Den and Balorfal.

Their house sigil is a dirus running across a gray field. They are renowned for their honor, and are steadfast in their actions and traditions. In the Koshtadic family of languages, Stenwulf translates to "Wolf born" or "Son of the Wolf".

House Stenwulf is an ancient house of Koshtadic descent founded during the Age Of Legends over ten thousand years ago, though they first appear in the historical record at the end of the First Era, during the days of the Thyllanorian kingdom, when the missionaries of the Two Paragons expressed their concern over the difficulties of reaching the land and communicating with its people to no avail (as a result of this, Frostfall is the only place on Andoras with predominant faith in the Old Beliefs). What remains of their tale before the arrival of the Edrossians is told from their skalds, and cross-referenced with similar stories acquired from the Tegrushkin. The House was founded by Balor Stenwulf, a legendary warrior-prophet who lived during the Age of Legends. He was among the many Koshtadic warlords whom is said to have fell victim to the worsening conditions of their homeland Koshtahdivlann, which was mysteriously freezing over and causing many in the far north to die from the frigid exposure. The continent gradually began to grow colder and the harsh northern winds would bring deadly and unpredictable weather, causing wildlife and crops to wither away. The warlords of Koshtadic clans were never united before these events, until Balor had called a gathering of the clans, which apparently had not happened in many millennia, and even the seers of their society could not give a recantation of who -- or what -- caused this gathering.

Balor was sharp tongued and convinced many of the clans that their best interests now lay on the horizon, suggesting that their people retreat to new lands lest their people perish in the cold. However, there were those who disagreed with his interests, and thought that he betrayed the Koshtadic culture by suggesting that they abandon their old pursuits of life in favor of new ones, as there was a recurring belief within their society that the aggressive lifestyle of the Koshtadic people brought about the gods' wrath, and their land's ruin. Balor spoke of his visions seen in his dreams of a new land with plains and forests of verdant green and a great mountain range whose highest peak could caress the moons. With the conditions growing worse by the day, many had little choice and joined with Balor. Those who chose to stay behind soon were forced to leave as well, and eventually they migrated to northwestern Doras Edrossi, becoming the Tegrushkin.

Balor lead his clan and those who agreed to follow him westward through the Frozen Sea. Balor assured his followers that his visions would lead them to their new home. Unfortunately, many of the clans were said to not have made it through the great voyage. It is unknown what happened to the other clans on the expedition and it is commonly attributed to be harsh conditions, starvation and or simply becoming lost to sea. Some even thought sea monsters were the cause.

Balor landed with his clan and what remained of his followers and settled into what is now Frostfall and built Winterborne. Almost immediately, they were also faced with the threat of a kingdom of dying giants, who despite being on the verge of extinction gave the invading Koshtadics quite a challenge in settling the lands for human habitation. Whether the giants finally died out or voluntarily retreated from their lands is uncertain, but after some time they evidently posed no threat to the Stenwulfs and their followers, who established the Kingdom of Frostfall; they then ruled mostly isolated from all except the Moonlyt Peaks for thousands of years. What remained of the followers began to spread across Frostfall and settled in on their own. After settling into new lands, the clans of Frostfall had gathered and named Balor the King of Frostfall and pledged their service to him for leading them away from their dying homeland.

Over the course of centuries, House Stenwulf ruled relatively unmarred for a time due to the tight-knit nature of the Koshtadic clans that had migrated over from Koshtahdivlann and their belief that they owed their livelihood to Balor and his family, but their rule was never uncontested -- an artifact of their former society that still remained in the present was their need for honor and the desire to have only the best rule over them. Even though many had respect for the noble family, few others did not. For a time, House Stenwulf was rivaled by the House Lokhmann (Lockman in present).

During the Dragomyr invasion of Andoras, the Northmen under House Stenwulf worked together with the Moonlytes of House Stone to the south to fortify the Moonlyt Peaks, building fortifications where it was deemed necessary and relying on the natural protection of the mountains to keep advantageous positions in battle and to hold important chokepoints that would keep the Dragomyr soldiers at bay. As kingdom by kingdom fell to the south, the threat of invasion grew ever closer, and beginning in 4 AC, the first assault into the Peaks was launched. The defenses worked well despite the threat of dragons being able to simply fly over the mountains, but on foot the Moonlytes and Northmen were some of the most savage and well-fought soldiers that Draegon I Dragomyr had encountered on all of Andoras -- so much so that it took 3 years to finally reach Frostfall, and one year after that to force both the Moonlyt Peaks and Frostfall to surrender in the same fight, in the Battle of Winterborne. Though the Stenwulfs did not enjoy the prospect of dependence, they accepted their vassalage with gritted teeth and eventually came to respect the Dragomyrs, though they never outright groveled to them as was the case with House Brackwater in The Wetlands, who surrendered as soon as the Kingsland fell in 1 AC.

Eventually, they married into the very same family which had subjugated them three hundred years ago, securing an alliance with the Dragomyrs like no other when Gwen Stenwulf wed Taeronys Dragomyr, son of king Aegor IV Dragomyr. Though the couple was said to have strong feelings for each other, they were separated due to Taeronys's ties when the Civil War against his family began, and was called to defend Dragonspire when the Second Siege was underway, resulting in a rebel victory, the deposition of House Dragomyr, and the dissolution of the Kingdom of Andoras. Gwen now believes Taeronys to be dead, though unbeknownst to anyone on Andoras he lives, plotting his return at his house's ancient ancestral home of Dragomyra.

Now, as the Civil War is behind them and another war -- the War of Embers -- presents itself, House Stenwulf is faced with a predicament. Edward III Stenwulf and the Northmen are going to war with the Moonlytes, whom they hold to have betrayed them for siding with the rebellion and preventing the troops of Frostfall from going south to aid the crown and its other loyal vassals, such as Edrane and the Wetlands. This comes with an unfortunate drawback; the Moonlyt Peaks are allied with Thyllanor, and as such will no doubt draw their ire and perhaps pull them into the catchall war that the War of Embers has dutifully been suited as. There also remains Edrane; though they are neutral and are actively trying to keep themselves separated from the conflict, the prince Dessar Tyseth is married to Jonella Stenwulf, which should imply that they hold some sort of alliance between them, and it remains a point of consideration for both nations if and when they go to war.

Retrieved from "https://a-crowns-price.fandom.com/wiki/House_Stenwulf?oldid=10144"
Community content is available under CC-BY-SA unless otherwise noted.