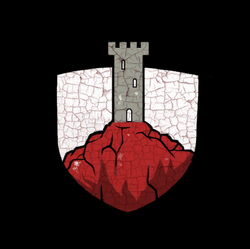 
County of Theirin
City of Brand

House Sewick began as a small mountain tribe in Kingsland sometime in the Second Era, the village of Brand their only settlement. The Sewick Tribe, rather than raid and rob or farm peacefully, as was typical at the time, parleyed with House Dayton over land frequently. It's said that when the settlers feared full annexation from House Dayton, the construction of Brand's walls began. The Sewicks and their other town families made false amends while they chiseled away at their mountain, spending more than two dozen years building and mining. In a rush of luck for the settlement, the nearby town of Wasten was raided by a clan of bandits, and the citizens were forced to flee in the direction of Brand. Rather than keep them out and let them be slaughtered by the bandits, the Sewick's took the lead of Brand and let them in, so long as they stayed and helped. Together, the new and the old families fought the bandits together, repelling them and giving them time.

While they were no longer a tribe, the Sewick's were far from the organization of a noble house, and were far too focused on a possible conflict with the Dayton's to worry about it. With the population of their town expanded exponentially, they inspired the other families to begin construction, knowing that if they didn't unite and defend themselves, they'd be defeated by the superior force. Using the mountain they rested on as resource, the builders and townsfolk of Brand started a dozen-year project of building thick, stone walls around their settlement. These walls are modernly known as the Hollow Walls, as they still stand and guard the Hollow District and Keep of Brand today.

The time came that House Dayton marched on Brand and demanded their annexation, citing that they weren't an official settlement and that they sat on their lands. To counter this, the Sewick's declared themselves the noble house of Brand, boldly stating that the Dayton's were trespassing on their lands. Obviously infuriated, the better equipped and funded House Dayton would launch a skirmish against Brand, but found themselves buffered by the large stone walls, which they hadn't expected to be there. This didn't halt House Dayton entirely, while they weren't going to declare an all-out war on the smaller settlement, they were going to try and siege it. History is unclear if the Dayton's got far, for it's told that the siege was interrupted quickly by the Sewicks offering to swear fealty to House Dayton, on the terms that they kept rulership of the city, to which the Dayton's accepted.

On the year of 5E 103, one of the most influential and remembered of House Sewick, Eduard, was born. At the time, Brand was a single entity within Dayton's lands, which Eduard changed quickly. Using Brand's considerably underwhelming levies tactfully and aggressively, Eduard brought many other towns and villages under Sewick control. Eduard peacefully annexed the County of Newan and forcefully conquered the County of Theirin, Rolor, and Manewall founding the Duchy of Caden, named after his father Cadyn.

Eduard Sewick also greatly expanded on the city of Brand, turning it into the mountain that it is today. The original Hollow walls still stood and protected the inner-settlement, but Brand had grown so much that a majority of the city was outside of these walls, protected by palisades. Revitalizing Brand's industrious nature, Eduard commanded the construction of massive stone walls to link with the mountain, so that the borders of the city might be better protected. A more controversial decision of his was to replace every building in the city with a stone-built replacement, this project took the last twenty years of Eduard's life, and was only finished by his son, Edyrick. Eduard's decisions caused a great deal of hardship for both House Sewick and those living under their rule, but they grandly paid off in making Brand practically unsiegable, and expanding Sewick influence greatly.

Bogdan was House Sewick's first true tyrant, most well-known for his lust for conquest and harsh grip on his lands. He was married to Sabina Lane, tying the houses together ever closer in an extended hand of friendship to House Lane, whose influence had waned greatly. He took the throne early, when he was only 16, and at first it seemed he'd be a level-headed, though strict ruler. This illusion was quickly dispelled with Duke Bogdan's reaction to a mob of peasents forming around the Hollow Walls, rioting against taxes and classism, mostly typical townfolk-qualms. Of the opinion that Caden had become too tolerant and gentle for Andoras life, Bogdan had his levies marshalled to brutally massacre the mobs, sparing none involved, quickly thrusting the lands into fear. His wife, Sabina, noted that Bogdan revelled in the slaughter, and his mind was suddenly consumed by visions of conquest and glory.

Once tensions had calmed somewhat, he turned his gaze eastwards, to the County of Manewall, which House Sewick had granted independence to eras earlier, claiming that the County were de jure lands of Caden. His armies were as ruthless as he was, and it was rumored by the people that Bogdan used witchcraft to become more ferocious. This was likely false, but nonetheless, Bogdan's forces slaughtered levy and townfolk alike, annexing Manewall without hesitation. Returning to Brand, it seemed to many that Bogdan's rule would be a long and terrible one, and it was rumored he wanted to rebel for the throne of Andoras itself. However, miraculously for some, Bogdan was killed under seemingly mysterious circumstances. There were rumors that Bogdan was killed by the gods themselves, which House Sewick readily encouraged. In truth, Bogdan was apparently killed by his older son, Gabryel Sewick, in his sleep.

While most would have considered this an act of heroism, it was likely only Gabryel's way to get relief, as Bogdan's rule over his people was not nearly as harsh as his grip on his family. Bogdan's legacy would survive, however, as it cast the Dukedom of Caden as a force to be considered to many, it's military power having been practically invisible with it's inactivity. Gabryel extended a hand of peace out to the people, even going so far as giving reparations to the families damaged by the "Tax Massacre". House Sewick breathed a sigh of relief, for Bogdan's aggression and ambition surely would have earned House Sewick a good deal of new enemies, if not their own extinction.

Bogdan's portrait, painted near the end of his life.
Add a photo to this gallery

Considered a far more tempered Duke than his father, Gabryel's rule was far from the most prosperous or successful, but after Bogdan's nine year rule and his charity, he was celebrated among the smallfolk as the savior of Caden. Ever fickle creatures, however, the peasentry soon let the memory fade, and Gabryel's rule became normal like any other's. His most notable actions were his extended reparations to the city of Brand and the town of Elorin, which had taken heavy damage with Bogdan's siege.

Gabryel's reign was a comparatively long one, having taken the Seat at 13. He ruled for 27 years before his death, and the time was considered stable. He was married to the noblewoman Adriana Hiras, and sired three children before dying in childbirth. His rule stagnated somewhat after this, spending most of his time grooming his heiress. On 8E 345, June 15th,  he was assassinated on the orders of Cody Hewell, only three days after his 40th nameday.

Gabryel's direct heir, Catina Sewick is the current head of House Sewick, and Duchess of Caden. She crushed House Hewell's rivalry with House Sewick by revoking their titles and rendering them extinct as revenge for her father's assassination. She introduced productive laws to the Dukedom of Caden, heavily damaging espionage and enhancing both taxation and registry. During the 346 AC rebellion, she allowed the County of Manewall to cede from the Duchy, both to spare war and give further reparation for her grandfather's crimes. She was the major hand in the formation of the Knight's of Catina and the Hollow Guard, greatly increasing Caden's military power and influence with it's newfound independence.

Retrieved from "https://a-crowns-price.fandom.com/wiki/House_Sewick?oldid=9420"
Community content is available under CC-BY-SA unless otherwise noted.