A Crown's Price Wiki
Register
Don't have an account?
Sign In
Advertisement
in: Noble houses, Kingsland, Duchy of Caden,
and 2 more 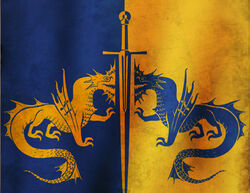 Count Terick Lane and Count Eduard Sewick Count Lane willingly swore fealty to the County of Brand, giving Eduard Sewick the momentum he needed to conquer the larger County of Theirin, marching himself with his armies beside the Sewick armies. It's said that the main driving force behind Count Lane's decision was the historical rivalry between Theirin and Newan, the two having had many border disputes at Newan's southernmost lands. This joint conquest against Theirin and eventually Manewall, aswell as tactful arranged marriages between the two Houses, created a strong bond of friendship between House Lane and House Sewick. Long after both Terick and Eduard had died, House Lane had been named a syncretic house of House Sewick, creating a permanent non-aggression pact between them unless the syncretism was broken.

Edryck Lane was knighted by Gabryel Sewick in his early life, and was made the Commander of the Brand City Guard, aswell as the Caden Knights. He is widely known as the Champion of House Sewick, and has won several duels of honor in their behalf. He had grown up amongst House Sewick, House Lane allowing him to be raised in the Hollow Keep as a common show of trust between the two. Catina Sewick considers him an older brother, and has placed a good deal of faith in his abilities as Champion.

In the 346 AC rebellion, Sir Edryck Lane joined Sir Waltir Sewick's army in the war effort, the the two were widely recognized for their heroism on the front lines. Though Waltir Sewick denies this, stays humble, Edryck Lane accepted this fame with a cocky attitude and charisma. He often uses this reputation to seduce or persuade, and is considered a socialite Knight. However, now that he commands the Knights of Catina aswell as the Hollow Guard, he has been much busier and hasn't gotten out much to socialize with the smallfolk as often. He was named an official advisor of Catina Sewick, but this was more just an excuse for Catina to give him a higher wage. Many a noble jested that the two wished to marry, but such jests were shrugged off and ignored.

Older brother to Edryck Lane and usually the more sensible, Toryll Lane was the reigning Count of Newan aswell as official member of Caden's war council, alongside Waltir Sewick, Edryck Lane, and Venn Calyth. He was married to Laura Sewick, sister of Waltir Sewick, and the two sired two children, Ralor and Martha Lane. Toryll Lane, while not having Edryck's charisma, is looked fondly upon by his own people for a troubleless rule.

However, Toryll has heavy war ambitions, and seeks to recreate the co-operative war campaign of Eduard and Terick, hoping to ride beside Catina in battle against Manewall. Catina notes him as being a glory hound, furious when he was forced to stay in Newan and rule rather than join his brother in battle during the rebellion. He has also directed the large increase in husbandry in Newan, especially concerning horses. The County of Newan was known for having some of the strongest horses in Kingsland, often exporting them to Dragonspire itself at times, and Toryll wanted to take advantage of this. Instead of exporting most of their horses as was past, a great majority of them now rode for the Knight's of Catina.