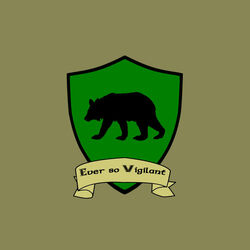 
Many river-traveling mercenaries that could be hired.
Cadet branches
House Gallomont
Date of founding
Age of Legends
Age
Roughly 10,000 years
Founder
Victarius Brackwater
Ancestral weapon
Serpent's Bite
House Brackwater is the ruling family of the Realm of The Wetlands.

The House of Brackwater was its own kingdom before the Drakonians landed on Andoras. They were a small, yet cunning house which had attained its crown through intrigue and fabricated claims -- never actually directly going to war, as it would certainly be tragic for the Brackwaters, sparse as they were.

When the first Drakonians under Draegon I Dragomyr landed on Andoras to conquer it, the Brackwaters were the first to actually bend the knee without conflict immediately after the conquest of the Kingsland and the death of House Dayton, as they were very aware of the Drakonians' power and knew they would lose much if they resisted. After submitting to their new lieges and giving up their kingdom title, the Drakonians decided to allow the Brackwaters to retain the title of Highlord, and they were permitted to continue to rule their lands if they continued to swear fealty. Many houses and minor lordships weren't so lucky (mostly as a result of fighting back), but for sparing their people and lands, the Brackwaters owe their respect and loyalty to the Drakonians and still do to this very day.

Life after the conquest for the people of the Wetlands was mostly peaceful, with the exception of rebels who refused to recognize the legitimacy of the Andorasi crown. Many of the other houses saw House Brackwater as nothing more than boot-kissers, and yet, they ignored all mocking from outside the realm, instead remaining close to the Kingsland. As time went on, house Brackwater would forever be loyal to House Dragomyr, even in the face of certain defeat -- in particular, the Civil War.

In the year of 346AC, the Houses of Karthmere, Grimolt and Stone saw the ever-growing tyrannical status of Aegor IV and his war-hungry nature harmful to their houses, and perhaps all of Andoras, and decided to take up arms against their liege. In two years, much had passed during this time; battles were fought, lost, and won. However, even with the combined forces of the loyalist armies, it was not enough to fight back the rebels for too long. Though he fought beside his king in the Second Siege of Dragonspire, Rolland Brackwater failed to protect Aegor. He watched as his king, the very man he and his family swore to protect, die in battle. In a fit of rage, Rolland spotted a Karthmere soldier fighting against two Brackwater footmen. With a swing of his sword, he sliced the man's tendon. Rolland then violently heaved the man into a lit forge and closed the gate behind it, watching the man roast in his own armor. For the unfortunate Brackwaters and the Loyalists, the civil war was lost. The Dragomyrs were either killed and exiled, and the reign of the Dragomyrs was ended.

The years following after the war took its toll on House Brackwater. They had no liege, and they had failed their duty given to them centuries before as the ubiquitous defenders of the realm. Rolland blamed himself for the death of his beloved liege and the royal family, and suffered from bouts of depression for years. Rolland knew not how many Dragomyrs survived -- or if they were even still existed -- but if they were, he made himself and his whole house an oath to never lose hope, and to vehemently vie for their rightful place on the throne once more.

Not too long after the Civil War's conclusion, one rivalry in particular was allowed to manifest into a war -- House Karthmere of Thyllanor, faced off against House Grimolt of Thunder's Shore. After the Civil War made all Andorasi realms independent, these two houses, both of which were the closest in proximity to the shattered union of vassals in the former Kingsland (now known as Ember's End), became aggressive towards one another and eventually declared all-out war. The name of the war, the War of Embers, is often attributed to Rolland, in a mocking tone; he was very vocal in his belief that the Kingsland was still de jure territory of the Dragomyrs, and it was folly to wage war over it. Of course, the War could not stay contained within one border; near the Wetlander border town of Riverbay, the Duke of Alham Larys Gallomont of House Gallomont was killed in action trying to repel both sides, which led to international criticism of the war, and also led many in the Wetlands to believe that they would be dragged into this conflict. Rolland was the first to suggest a diplomatic summit between the three nations, in an effort to figure out what could be done to minimize the effects of this war elsewhere -- secretly, he harbored more compassion for the Grimolts, and would arrive with a Shoreman-centric view.

When the conversation turned to the inevitable topic of the Dragomyrs and their legitimacy, Rolland fought for them, but ended up being the lesser man in the argument, as both the Karthmeres and the Grimolts viciously denounced any connection with the Dragomyrs and their crown. Dalan Karthmere, Highlord of Thyllanor, then accused Rolland of worshipping Aegor's dead body and imagining him in his head when he made love to his wife. This led to a communication breakdown; Dalan stormed off, angry and beaten when the Grimolts took the Brackwaters' side in the name of diplomacy.

With Dalan gone, the two quietly forged their own alliance in Vicarshall, and the Brackwaters agreed to support the Grimolts in the war if things got out of hand, even though their own infrastructure and levies were both severely damaged.

Retrieved from "https://a-crowns-price.fandom.com/wiki/House_Brackwater?oldid=10160"
Community content is available under CC-BY-SA unless otherwise noted.