The Grand Duchy of Tynor is in all senses the Royal Demesne, as the Grand Duke has always been one of the ruling family, usually the heir. It is significantly larger than the other duchies of Edrane , responsible for it's status as a Grand Duchy(Think the Archduchy of Austria). In both economy and manpower, it is also the strongest when individually compared to the other duchies and counties of Edrane, largely because of it's size and because of Coil, an extremely major hub of trade between Andoras and Doras Edrossi .

The current Grand Duke is Varron Tyseth, who administrates and rules it in his own court at Castle Tyseth, House Tyseth's castle was vast and acted as a manor. Many of House Tyseth's more distant members and branch families lived within the castle. 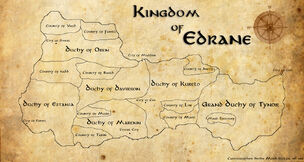 Add a photo to this gallery
Retrieved from "https://a-crowns-price.fandom.com/wiki/Grand_Duchy_of_Tynor?oldid=8786"
Community content is available under CC-BY-SA unless otherwise noted.