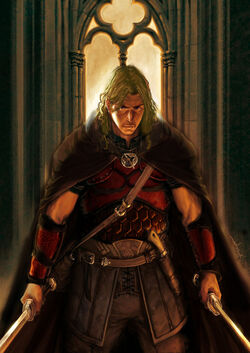 Gothaen was born within Fangrest to Garrius Synthor and an unknown woman in 319 AC. He is a legitimized bastard, and thus has rights and claims to all his father's titles. His father, though wanting to dispose of Gothaen quietly, did not expect that his aging wife would have another child. Garrius also felt a shred of compassion for the boy, as he resembled himself and there was no doubt as to where his heritage -- at least half of it -- had lied.

Gothaen was isolated from his father often, as the two grew older and did not want much to do with each other. When Gothaen started becoming a man, Garrius took him to the meager training fields in Fang's Rest and started hitting him with a wooden sword progressively harder, telling him to retaliate in turn. Gothaen did, and in the fury of battle became so carried away that he smacked his father with a training staff in the face, which left him bleeding and sore for days, along with a large purple bruise on the cheek. Garrius, however, did not punish Gothaen for this, and instead praised his ability to act under the pressure. He kept this in mind, and a few weeks after his 16th birthday he enlisted in the Thyllanorian army, in 335 AC.

While in the military, Gothaen had been too young to fight in the Farmers' Revolution, but served during the Tentative Years that followed, during which the king Aegor IV Dragomyr continued to pass 'mandates' over his people which would often be disastrous, such as making the realm entirely centralized or politcally damning Thyllanor in the same manner that the kingdom would condemn a captured hostile nation. Gothaen, among many in Thyllanor, saw the problems in these reforms and also the difficulty that the Dragomyrs were having in attempting to enforce them. Having recently been assigned to the 89th Battalion, his predictions of war would come true a decade after his enlistment.

Eleven years into his service, Gothaen enjoyed a high rank in his battalion at Lieutenant Major, being only outranked by the commander himself, and equaled by a few in his same position. What Gothaen had that the others lacked, however, is a natural aptitude for battle, a martial cunning, and a general charisma that seemed to follow him around wherever he went. When the Civil War began in 346 AC and the 89th were sent with the 17th Regiment to fight, initially the conflicts were uneventful and indecisive. It took until next year when the first real loss was dealt to the cadre of soldiers, when their commander was killed in action during the First Siege of Dragonspire, apparently shot at from the city walls. Dismayed, the men wanted to return home, but someone in the camp spoke up that a new leader should be appointed. Almost unanimously, the charismatic and strategic Gothaen was brought up, and in a near-unanimous vote he was chosen as the new leader of the 89th, automatically being promoted to Captain. The longevity of the First Siege meant Gothaen had plenty of time to devise what he wanted to do with his men -- he wanted them to go above the general call of the other Thyllanorian soldiers, but he didn't want them to stand out.

Once the First Siege had ended in a stalemate, Gothaen flocked back to Thyllanor like much of the realm's armed forces, and gathered many men to bolster his ranks. He did not return to the battlefield immediately, though -- instead, he had brought his battalion to the same fields in Fang's Rest where he himself had trained many years before. Gothaen's father Garrius helped with the procedures and teaching, himself being a commander during the Farmers' Revolution. They set aside some time to go over basic training and tactics that Gothaen had formulated during the First Siege's lethargy, along with introducing a special type of warfare that the Crimson Lions would pursue. He took their typical garments and covered it in soot and dirt, and then demonstrated its effectiveness as he hid in plain sight. He also commissioned shields that had the coloring of the traditional Thyllanorian-deployed shield reversed, which made the lion on it red and the rest white. He dubbed his battalion the Crimson Lions, and armed with their new tactics, their discipline, their camouflage and their growing reputation, they soon became one of the most notable and feared forces on the field of battle, and Gothaen continued to rise in rank for his accomplishments and service.

Gothaen is famously known among the nobility of Andoras for his rousing speech that he gave at the conclusion of the Second Siege of Dragonspire. It is widely reported that Gothaen spoke the last word at the same exact moment that a hole finally broke through the walls of Dragonspire City, leaving them only five more days to assault the city in what was dubbed the Final Spark. The Crimson Lions shone as always, and on the last day of battle ensured that the last forces of the crown still living in the city were flanked while the primary troops marched forward to The Dragonspire itself, at the far end of the city. Who killed Aegor himself is uncertain -- some say it was Gothaen, others Dalan Karthmere. Gothaen has chosen not to comment on this, and often threatens whoever tries to pry the truth of the matter out of him.

Whatever the case, for his heroism in the war and skillful application of strategy to the battles he had fought in, Dalan Karthmere appointed Gothaen an auxiliary general, the highest attainable rank by anyone in Thyllanor sans the Highlord himself, joining the likes of Adrian Karthmere and Albrod Calnus.

Once the Civil War concluded, the Crimson Lions returned to Fangrest and, for the first time in two years, were able to rest and see their families once more. In 349 AC, Gothaen's father Garrius Synthor died, and now he has inherited the County of Fangrest, being dubbed Count-General. In the year since, he has dedicated more funds to expanding the martial facilities of the castle, turning the lacking field he had been trained on into a dedicated courtyard that was well-supplied and addressed. He took the Crimson Lions' sigil for his own, as though he is a Synthor by legitimization and blood, he still finds his own stigma in the status of being bastardized. He retains the surname of his house, but is now his own man, and the banners of the Crimson Lions proudly fly over the small manor town.

Retrieved from "https://a-crowns-price.fandom.com/wiki/Gothaen_Synthor?oldid=10161"
Community content is available under CC-BY-SA unless otherwise noted.