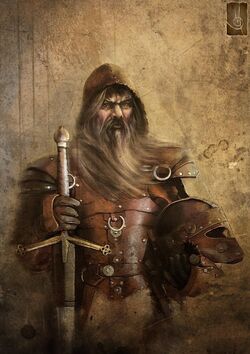 Garnder, also known as Garnder Golemont or Garnder the Great, was the man responsible for bringing prosperity and rapid invasion to the Moonlyt Peaks nearly a hundred years before the Dragomyrs sailed to Andoras and conquered the continent for a kingdom of their own. To accomplish this, he started as a lowborn of uncertain origins, and through his prowess and prestige, developed a following that over time became an empire. At that time, he had done what no other man in the Moonlyt Peaks had done; unite the region when not under outside threat, such as when the region banded together to defend against Thyllanor in the war now known as Callen's Folly. At their core, the Moonlytes were still tribal people, and were not technically united; they returned to their tribal boundaries once large-scale wars were over. Garnder, in some way, brought modernization to the region, establishing a singular empire where there was once hundreds of power-squabbling peoples.

His empire collapsed following his death without a strong power base to maintain the distant provinces' loyalty, and fractured into several different states. It would seem that the men were loyal to Garnder -- not to the state itself. The largest part of it, however, would later become the demesne of House Stone, who would unite the Moonlyt Peaks themselves just briefly before the Dragomyr invasion and their subsequent subjugation.

Garnder was an opportunist and an expansionist and believed in the Moonlytes' right to expand beyond the Peaks they were native to. Starting to descend to the south and southwest, Garnder began conquering Gardoria and the northern Wetlands, and with both regions unprepared for war, they fell easily. Lacking the logistic and military power to truly conquer the whole region, he instead opted to hold the western lands of both areas, forming a coastal empire where travel within was easiest by sea.

By the time Garnder Golemont had been in power for 20 years within the Moonlyt nation, a large chunk of Gardoria and nearly half of the Wetlands were held by him. He self-titled this nation the Moonlyt Empire, and it would last until his death in 74 BC. He took on the title "Golemont" later in his life at some time, which in the Norttung language means "Highest peak" or generally corresponds, metaphorically, to the highest-respected power in the land and the one to whom all authority should be laid upon. His impact was great on the Moonlytes, who gave them the inspiration to interact with the other Andorasi.

After his death, the squabbling vassals under his rule were disenchanted and began fighting amongst each other for control of the empire. Garnder may have had two sons, but their names are not remembered and were probably not recognized as having strong claims. By 30 BC, Gardoria had reformed, and before that in 44 BC, the Wetlands had been reunited. Garnder is often forgotten in history in places other than the Moonlyt Peaks, but he has left his mark on the world; statues of Garnder or believed to be of Garnder are prominent in northern Gardoria and the southern Moonlyt Peaks. His claymore, Bromfel, is on display in Highmountain Hall.

Retrieved from "https://a-crowns-price.fandom.com/wiki/Garnder?oldid=9415"
Community content is available under CC-BY-SA unless otherwise noted.