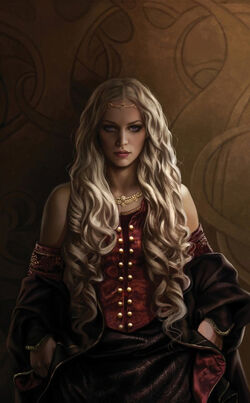 Season(s)
1
Titles
Lordship of Silverholme
Realm of Thyllanor (3rd in line)
Also known as
Ellie (Adrian)
Mistress of Gold
Status
Alive
Age
21
Date of birth
December 6th, 329AC
Death
{{{Death}}}
Origin
Faercrest, Thyllanor
Allegiance
Herself
House Karthmere
Religion
The Five Paragons
Family
House Karthmere
Portrayed by
N/A
Eleysiea Karthmere (born December 6th, 329 AC) is the only daughter of the deceased Dalan I Karthmere, older sister to Adrian Karthmere, and younger sister to Dalan II Karthmere, the Realm of Thyllanor. She is the Countess of Silverholme (though she does not directly rule it) and third in line to the throne until her brothers have legitimate offspring.

Eleysiea was born within the royal quarter of Faercrest, Thyllanor. Eleysiea grew to become a beautiful maiden, with ocean blue eyes and long hair like light golden silk. Over the years in her childhood, she was educated and tutored within Faercrest, as is traditional for House Karthmere. Over time, she became a well-spoken and elegant young woman, with a breadth of knowledge that easily impressed her older brother Dalan, and led to some mocking on the part of her younger brother Adrian, who teased her for her dedication to learning. Her face is always buried within books because she has always had a bright curiosity of the world, and in particular, how cultures differ in their various ways -- she was allowed to focus on studying entirely, whereas her brothers underwent martial training around the same age.

She loves both of her brothers dearly, but seems to be closer to her younger brother, Adrian. Her uncle Tyralt will get on her nerves from time to time, but she loves him like a father figure nonetheless. Family is very important to her, and this remains a key factor in her day-to-day decisions. Generally she is polite to strangers -- and the small-folk of the realm -- but will ensure they know of her power and status.

Despite her beauty and status, Eleysiea has not attracted many suitors, though many would ask for her hand for personal gain. Some attribute this to unluckiness, but others believe (and gossip) that there is more to Eleysiea than meets the eye. Those who have approached her before return feeling as though they had been berated, cursed, and distanced after some time spent with her -- the occurrence of which is unknown and irregular. She seems to be aware of it herself, as she will opt to lock herself in her chambers for many hours, especially when she begins to feel ill or angered. It would seem that a vicious personality comes out of her at sudden moments that cannot be stifled -- only provoked, and her actions during this time are not unlike that of her younger brother. She has known of this for some time, and though it may have scared away potential suitors, she has no care for the political aspect of royal marriage, and is continuing to isolate herself and read. She believes that she will marry whomever steals her heart, regardless of their social status or benefit to her family, though it is implied among Dalan and Tyralt that this will not be the case in the near future.

After she was granted the County of Silverholme in 345 AC for her 16th birthday to commemorate her coming-of-age, she tried her hand at ruling but found it tedious and boring. As of now, it is ruled by a council of minor viceroys in her name, who continue the same administration that the previous ruler, her bastard uncle Malveus Landrocaster, had instituted.

As of late, Eleysiea has been staying at home, but regularly attends feasts and balls if she can help it. She also enjoys reading very much, and has poured over many a book more than once to find out about the secrets of Andoras, and by extension, Drakonius. At the age of 21, it is undoubtedly so that her brother or her uncle are considering marrying her off to secure an alliance, but they seem to have respected her wishes on the matter, as she remains in Faercrest and continues to immerse herself in the Karthmere's vast library. Able to predict her sudden mood swings with some remarkable accuracy, many do not know of the secret Eleysiea behind closed doors, who can be just as vile as Adrian and then, in minutes, as diplomatic and well-spoken as Dalan.

She considered attending the peace summit that her brothers and her uncle hosted at Vicarshall to defend her house's claim in the War of Embers, but decided not to go on a whim.

Season 1 roleplay will be written here when the season is launched.

Retrieved from "https://a-crowns-price.fandom.com/wiki/Eleysiea_Karthmere?oldid=10173"
Community content is available under CC-BY-SA unless otherwise noted.