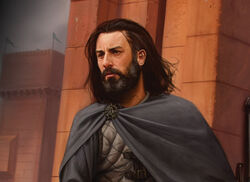 
Gwen Stenwulf - daughter
Portrayed by
Nick Stoll
Edward III Stenwulf (born August 23rd, 312 AC) is the current lord of House Stenwulf and Lord Paramount of Frostfall. He is often called Ed for short by his friends and family. Edward is known to be an honorable man who upholds his obligations and keeps the well-being of his family at first priority. During the rebellion that deposed House Dragomyr, Edward decided against marching south to join the siege but had sent a regiment of men to rescue his daughter instead. He received a message during the siege however, from Taeronys Dragomyr who wrote that Edwards daughter Gwen Stenwulf had been with him during his court visit to Dragonspire when the city was attacked. Gwen managed to escape through a siege tunnel that lead out of Dragonspire and was escorted back to the north by one of the princes men, Warne Hasty.

Currently, Edward rules Frostfall independently, putting his efforts to maintaining the stability of his holdings.

Retrieved from "https://a-crowns-price.fandom.com/wiki/Edward_III_Stenwulf?oldid=9380"
Community content is available under CC-BY-SA unless otherwise noted.