The Duchy of Davirron is one of the six duchies that lie within Edrane, ruled by House Sandor.

Economically, it ranks as Edrane's fifth wealthiest duchy, above only the Duchy of Marenn. It has no primary export, instead it exports many basic goods mostly equally.

In manpower, it ranks as Edrane's lowest contributer to the military, below all other duchies.

It's current ruler is Duke Mane Sandor, who rules from Mudden, the duchy's capital. 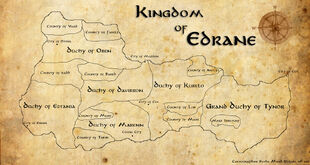 Add a photo to this gallery
Retrieved from "https://a-crowns-price.fandom.com/wiki/Duchy_of_Davirron?oldid=8783"
Community content is available under CC-BY-SA unless otherwise noted.