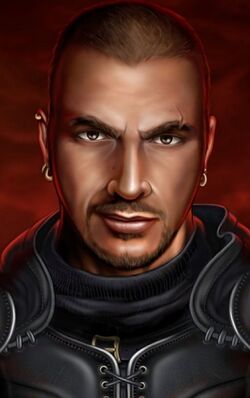 Dessar Tyseth is the current ruling Prince of Edrane, his reign has gone on for 18 years. He was born to Prince Marron and Princess Alena on 8E 312, July 14th. He is currently 38 years old, and sits on The Winged Throne. He is known as 'the Warrior' for his fighting in the Paragon's Revolt.

Dessar Tyseth was born to the ruling line of House Tyseth, his father Prince Marron had only sat on the throne for a year before Dessar's birth. He grew up alongside Diras and Lenia Tyseth, his younger brother and sister. It is said that he grew up a bully, causing fights with his siblings frequently. When he reached age 10 he began martial training.

Dessar spent a good deal of his teen years in training, enjoying it more than his siblings. He learned to wield a sword, practicing with a large wooden sabre modeled after Barrenblade. His father had plans for him to be a skilled general, in hopes of placing him on his council one day, and had his instruction shift heavily to mixed unit tactics and battle logistics.

When he was 16, he was betrothed to Lady Jonella Stenwulf in a Blessed Marriage, securing relations between Edrane and Frostfall. At age 18 in 330, Dessar Tyseth sired a son, Varron Tyseth.

Now aged 20 years, Dessar's father Marron passed from old age, leaving him to take The Winged Throne and rule over Edrane. Prince Dessar and Princess Jonella also sire a second son, dubbed Cyrin. Two years later they would have another, their first daughter, who they name Alania. A few years went on without incident, the ruling family raising their children and presiding over Edrane, until 8E 337.

When the religious commonfolk organized their rebellion, Prince Dessar personally led Edrane's forces in the field, leaving Princess Jonella as Regent-Princess. He led Edrane's army in the Siege of Mudtalon Castle, and led the vanguard in the two field battles that took place. Dessar is noted to have been a terror on the field, wielding Barrenblade against the rebels alongside the Caballero. It was in this revolt that he gained the honorific 'the Warrior', a badge of pride to Dessar, as few Edranish rulers have such honorifics.

Prince Dessar deigned not to get personally involved in the large civil war, as he secretly thought the rebels were just in their revolt, despising the actions of the Dragomyr King. He recalled the Army of the Sun from Doras Edrossi, sending it to the Dragomyr's by ship under the command of Dydos Sethe. He put Diras Tyseth, his brother, in command of Edrane's home forces, and instructed him to conduct minor raids against Gardoria and Thunder's Shore, so the Dragomyrs would not think they did nothing. When Diras Tyseth was killed in the Battle of Stebal and the Gardorian-Shoremen army withdrew from the princedom, he immediately negotiated a peace with Thyllanor in which they conceded defeat.

Thankfully, because of the war's coming close and the desire for it's end, Dessar managed to keep the terms neutral, as long as Edrane withdrew the Army of the Sun from Dragomyr control they would lose nothing and incur no further attack.

The rebellion left him with a better opinion of Marcus Dermond III than he had prior, as the Lord of Gardoria decided against trying to occupy Edrane, which would have caused many more deaths. In fact, Dessar was uncertain if they could even stop him without the Army of the Sun, which was fractured and reorganizing in Doras Edrossi and Edrane. This war also left him more cautious about lending out the Army of the Sun, as it could easily be argued that with it Edrane would have held it's own against the Gardorians and Shoresmen, perhaps even being able to lead an offensive.

Prince Dessar is currently making plans to wed his daughter Alania, and seeks to strengthen Edrane's alliances. Aside this, he is idly ruling over Edrane and doing nothing of note.

Dessar was taller than average, with a shaved head and light facial hair. His hair seemed to be a darkish brown color. His build was fit and lithe, giving him more agility than strength. His eyes matched his hair, and he had a few piercings on his ears, as well as a thin scar on his left brow.

Dessar is known as a blunt, taciturn man. He had no concubines, as most of the lust he held was for battle and glory. He hosted and competed in tournaments often, in fact he would often host a tournament for the sole purpose of getting to compete in one. He held little ire for his enemies of the 346 AC Rebellion, seeing it as both a personal failure and a failure of Edrane rather than a simple lost war. Thusly, he has opened communication with Gardoria and Thyllanor on numerous occasions, though hesitant to do so with Thunder's Shore (Edrane's more consistent rival.). 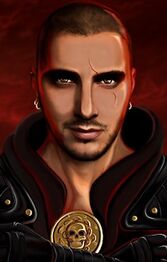 A younger Dessar.
Add a photo to this gallery
Retrieved from "https://a-crowns-price.fandom.com/wiki/Dessar_Tyseth?oldid=9369"
Community content is available under CC-BY-SA unless otherwise noted.