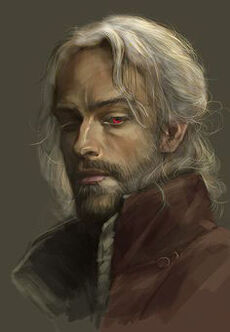 Daemalor Celtheon (308 - 348 AC?) was a Ceryno-Drakonian nobleman, soldier and tactician, and the finest acting military commander under Aeganar IV Dragomárus. He was a veteran of several wars and rebellions and was a part of House Celtheon, a noble house from the city-state of Ceryne. He was noted as one of the finest military tacticians in and beyond Andoras.

Starting in 326 AC, Celtheon quickly rose up the ranks, winning the admiration of Aeganar, and later, his son Taeronys Dragomárus, whom he was close with and personally trained. He yearned for earning his place in the ranks, and so frequently acted out dramatically or in a risky way to make his actions clear and visible. While most times this was met with either laughter or scolding, Celtheon was the one to ultimately track down and slay Dalan I Karthmere during the Six-Day-Siege -- this alone earned him a promotion to the rank of Captain at the start of the Tentative Years, which he would hold until he became a lesser general in the early 340s AC, and eventually, the commander of all Andoras's armies just before the beginning of the Civil War.

Daemalor was the primary commander for Aeganar Dragomárus in the Civil War. He was the first commander that the rebel forces truly encountered, when he made an appearance at the Battle of the Pantau Bay. After the Battle of Corcivaetas, Aeganar ordered him to embark on a northern campaign, which resulted in several primary Crown victories in Thyllanor and the Moonlyt Peaks. Thinking that their homelands being attacked would be able to force the armies back home, Daemalor pressed on, even when he knew that there were other ways to strategically win.

Daemalor was forced to pull back to Dragonspire when it was being besieged for the first time. Hearing a rumor that the city of Corcivaetas was full of the rebel army disguised as civilians, he gave the order to completely destroy the city, resulting in the Destruction of Corcivaetas. He later took up arms with his forces during the Second Siege of Dragonspire and is believed to have been killed, although his body was never recovered; his whereabouts are unknown, but he is presumed dead as of the present.

Daemalor is one of the most skilled knights in the kingdoms.

Daemalor is tall and has deep red eyes which are considered fierce and soul-breaking. His face is coarse and hardened by battle, with scars across the bridge of his nose and left eye. He has long white hair that is usually styled into a tail. He is considered handsome regardless of his facial scars, he is oddly noted for his sense of fashion.

He is noted for his calm and collected attitude, he always had a learned and wise demeanor about him. Some have viewed him as cold and uncaring, but he is more than capable of showing compassion and rationality. As the Commander of the Dragonspire military, he was also an instructor on battle strategy and swordsmanship and has took many squires under his wing, as well as Prince Taeronys eventually. He is cautious and patient, making him a crafty and well-versed opponent in combat, even in court. He is well disciplined and knows how to distribute it to those under his wing.

Daemalor has been a part of many battles and sieges, such as the 326 AC Rebellion and the Sieges of Dragonspire. He is notable for meeting Dalan I Karthmere during the 326 AC rebellion and killing him in personal combat, in the Six-Day-Siege.

Daemalor was born on April 12th, 308 AC to Matanar and Saelanna Celtheon in the city-state of Ceryne. Being born into House Celtheon, a noble house of considerable power in Ceryne, he was the heir to his family castle and trade post. He was the only child and thus had somewhat of a lonely childhood. Most of his childhood was spent being tutored by his father, who taught him about trading, banking and court life. As a child, Daemalor was said to have enjoyed walking around the grand port of Ceryne. At some point however, Daemalor was brutally attacked and left for dead on the docks by a petty gang whom targeted noblility, he was stripped of his gold and valuables.

Daemalor was eventually found and taken home to recover, he had several slash wounds on his face and was stabbed thrice in the chest. If by a stroke of luck, Daemalor managed to recover quickly and was up and walking not long after his resting. Daemalor became more irritable and angered afterwards, making a personal vendetta toward the thieves. He spent an immense amount of time studying books on swordsmanship and battle. He outright refused to continue studying trade until he was trained by a swordsman to fight. Matanar refused to hire a swordsman to tutor Daemalor, believing it to be barbaric and useless knowledge. Daemalor proceeded to go against his fathers wishes and trained for many years under an unknown tutor.

Throughout the years, Daemalor became extremely proficient in battle, having been in the Cerynian Guard for numerous years of service and repelled several Zaentovi raids and won many Edrossian wars with his prowess. He also tracked several gangs and had them jailed or killed depending on their crimes, he had eventually found and killed the same men who left him to die so long before. Later, his father Matanar had become sickly and infirm as time passed and eventually passed away, leaving everything to his only son. Daemalor became uninterested in the noble life after half a year of ruling his keep and decided to auction off his land for a hefty sum of gold. He apparently joined with a mercenary group called the Dragontooth Company for a short term and toured Doras Edrossi for contracts. Hearing of the opportunities of Andoras, he decided to sail west. He took a ferry across the White Sea to Dragonspire and eventually settled, buying himself a small estate with servants to take care of his elderly mother. From there, Daemalor had enlisted into the Dragonspire military and rose through the ranks throughout the decades, fighting and winning many battles for the crown with unwavering loyalty to House Dragomárus.

Retrieved from "https://a-crowns-price.fandom.com/wiki/Daemalor_Celtheon?oldid=10105"
Community content is available under CC-BY-SA unless otherwise noted.