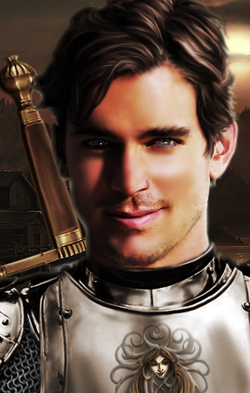 Cyrin Tyseth is the son of Prince Dessar Tyseth and Lady Jonella Stenwulf. He serves on the Council of Day as Diplomat of Edrane.

Cyrin has a youthful, handsome face with traces of facial hair, and smooth, unblemished features. He was shorter than his brother and father, but his build was more muscular and fit. He wore ceremonial plate and mail similar, though lighter, to his brother Varron.

Cyrin was more gregarious and charismatic than his siblings, taking full advantage of his status as royalty of Edrane. He had expensive concubines that were sterile, and had a large balcony room at the Palace of Deyn. Cyrin enjoyed the luxuries of life. He is very popular with commonfolk, leaving Edrane frequently to compete in tournaments, and there hasn't been a single tournament in Edrane has hasn't competed in. He frequents random taverns and brothels in Coil whenever he has free time. Such a lecherous lifestyle would cause problems with his siblings, if he didn't ensure it didn't interfere with his political life. He did his duties as diplomat to Edrane, and ensured he did not grow fat or unkempt.

Cyrin was born on 332 AC, only two years after his older brother Varron. He grew up playful and outgoing, constantly sneaking out of the Palace to play with the common children. He often got into trouble with his father, who frequently scolded or punished him for reckless or inappropriate behavior. As he got older he expressed dislike for the tactics and logistics teachings that his father wished him to go through, and put more effort into learning swordsmanship, neglecting the martial parts of education.

Cyrin didn't stop training with his sword, learning to fight with both a hand and a half sword and a greatsabre. He began to prove himself as somewhat of a large potential in swordsmanship, and at Cyrin's own behest, Dessar hired a master duelist from the Kingsland to further instruct him. He spent all his free time with his instructor, Maerys Trevelyn, or sneaking out into the streets of Coil to lay with common women and drink in the taverns.

Lechery threatened to consume him before his older brother, Varron, stepped in. He ground Cyrin's nose into the grindstone and kept a close eye on him. His father forced him to put his charisma to good use, hiring a scholar to instruct him in the ways of diplomacy. He spent almost three years doing nothing but learning to fight and learning the ways of intrigue and history, until the 346 AC rebellion. His sword instructor, Maerys Trevelyn, had to return to the capitol to join the Dragomyr forces.

Once the rebellion had ended, Cyrin continued his instruction but they had been forced to hire a new teacher, from Doras Edrossi, as Maerys had dropped off the face of the earth alongside the Dragomyrs. Due to his seemingly prolific skill with a blade, his father promised him that if he could learn to wield a greatsabre as well as he learned to wield a normal sword, Barrenblade would be his.

Driven by the idea of owning the family blade, Cyrin practicing with wooden mockblades with his new teacher, Muron Skivarus, for months. Cyrin relied more on agility and precision than strength or force, so the greatsabre presented somewhat of a challenge. He and his mentor had to practically develop a new fighting style that mostly involved using the movement of the body in tandem with the blade to make attacks.

Though his father fulfilled the promise and gave him Barrenblade two years ago, he continues to spar with Muron daily, honing the unique fighting style with the ambition of being the greatest duelist in the world. Of course, he was far from that feat, but his skills with the blade made him one of the greatest fighters in Edrane and perhaps even Andoras. His performance in the grand tournament in Coil was legendary, he emerged victor in the melee, besting all the competition. However, it is noted that this tournament lacked two of Andoras most famed tournament Knights, Taeronys Dragomyr and Maerys Trevelyn, both believed dead.

Cyrin is stressfully juggling lifestyles, trying to balance out mastering the Barrenblade, hone his diplomatic and intrigue skills, and hold a social life among the commonfolk. He finds himself pressed for time despite his status, almost always busy doing something, and the stress and his duties as Diplomat are going to force him to abandon one of those lifestyles.

Retrieved from "https://a-crowns-price.fandom.com/wiki/Cyrin_Tyseth?oldid=9371"
Community content is available under CC-BY-SA unless otherwise noted.