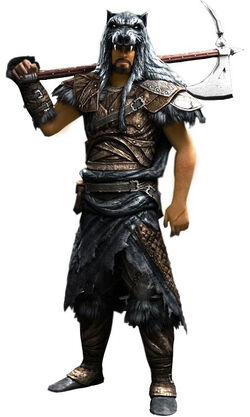 Season(s)
1
Titles
Master of Tactics
Also known as
'The Pick' (Common Nickname)
'Big Fucking Chief' (Nickname given by Vidnir Kostiv )
Status
Alive
Age
45
Date of birth
July 7th, 305 AC est.
Death
{{{Death}}}
Origin
Zaentovi Wilds
Allegiance
The Ebon Band
Religion
Zaentovi Nature Beliefs
Family
Unknown (Banished from tribe.)
Portrayed by
Samuel Adams
Ch'at Dinee or "Angry Mountain" in the Zaentovi language, is the current Master-Of-Strategy within The Ebon Band. He is a short yet extremely stocky man, and is known as 'The Pick' due to his affinity to use a war-pick within battle. His attitude is a bad one, one would say. Hence his given Nickname. Ch'at was also banished from his tribe for murder and assault.
Retrieved from "https://a-crowns-price.fandom.com/wiki/Ch%27at_Dinee?oldid=8417"
Community content is available under CC-BY-SA unless otherwise noted.