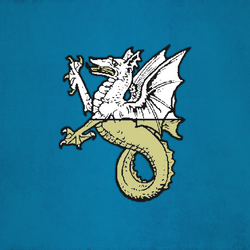 
Da Bacinia
Date of founding
7,855 B.C
Age
7,855 years
Founder
Valiha Ceryne
Ceryne is one of the most powerful city-states and the home to Cerynian Low Drakonians. It lies along the coast Northwest of the Drakonian Peninsula and is considered the closest thing to Drakonia during its imperial reign. They are a very wealthy city-state, thriving on trading across the White Sea and beyond. It is currently ruled by Malos Tregello and his house.

Ceryne emerged as a city about seven thousand years ago, founded by Valiha Ceryne in 7,855 BC, who gave the city her name to bear. She is believed to have been a sorceress, living until 212 and appearing youthful throughout. She is said to have given the city of Ceryne a special 'allure' to draw immigration to her city, which was extremely successful; the city of Ethromaia was almost completely abandoned in favor of Ceryne. This allure, as a magic aura, is said to still persist today, which is often cited as the reason that Ceryne is the most popular city-state.

Ceryne has been a refuge for those of Drakonian descent since the Dragon Wars. Most of the inhabitants are of Low-Drakonian descent, basically meaning that their bloodline has thinned since the fall of Drakonia due to intermingling with other cultures. There are also a considerable amount of pure Drakonians left that reside in Ceryne.

Ceryne is located on the coast northwest of the Drakonian Peninsula, as well as south of the Wailing Wilds. Ceryne is one of the largest port cities in the known world and maintains trade with multiple city-states and Andoras itself. The river Vyseri flows through the city and meets the sea from the rolling hills. Ceryne is known for it's frequent rain and stormy conditions, recieving the tropical storms from the rather close Drakonian Peninsula, but it can be quite warm if the sun lies overhead unhindered by the clouds. Ceryne is the closest city-state to the Drakonian peninsula.

The city-state is ruled by a magister, a high lord who takes the responsibility of administration of the law and control over the city. He is also responsible for delivering verdicts of tried criminals who are judged in court. Overall, he is responsible for the well-being of the city and the stability of its denizens relies solely on the Magister. At one point, Ceryne was elective but was changed by House Tregello after several terms in office.

House Tregello has ruled in Ceryne off and on since the 5th Era. They have linked their bloodline back to Drakonia, they mostly consist of Low Drakonian descent, but they are much more blooded than most.

Retrieved from "https://a-crowns-price.fandom.com/wiki/Ceryne?oldid=8141"
Community content is available under CC-BY-SA unless otherwise noted.