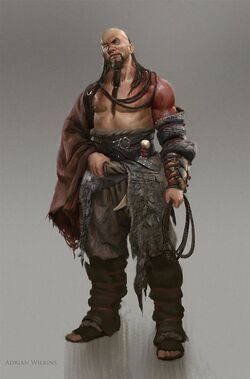 Season(s)
Season 2: Prequel
Titles
Officer of the Broken Cloaks
Also known as
Celly
Pops
Status
Deceased
Age
Died January 12th, 242 AC (aged 59)
Date of birth
July 19th, 182 AC
Death
{{{Death}}}
Origin
Thysia
Allegiance
Broken Cloaks
Religion
None
Family
Broken Cloaks
Portrayed by
N/A
Celomar was one of the main officers to the 'Odd Three', a triumvarate of the Broken Cloaks leaders, Jorry 'Lavos', 'Ser' Garryt, and Kallum Resno. He was an older man when he came to prominence, reaching the age of fifty six by the time the Odd Three were already settled in leadership. However, his age did nothing to stop him from formulating plans for the men and or stop him for being a gangster. Celomar was a rogue; he joined the Broken Cloaks in 199 AC, when he was only 17 years old, although he had been working for them indirectly since he was 11. Born to peasant parents, Celomar took the route that many children with no promise at a future took; he began working for a local gang in exchange for his and his family's protection and a promise for food.

He was rather unnoticed by his subordinates when he began, and it took over 30 years for him to start moving up the ranks, until he became an officer in 234 AC, under the Grandmaster Juslian di Vyse, and remained so after Juslian's uneventful death in 238 AC, at which point Jorry 'Lavos' became the Grandmaster of the Broken Cloaks. Celomar was close with Jorry, mainly because Jorry had been assigned to Celomar's training regiment when he joined in 227 AC. Celomar offered something that most other trainers could not; he was a gifted tactician and taught his pupils these same tactics and how to apply them.

Keeping Celomar close after his placement, Jorry introduced him to Garryt and Kallum after becoming Grandmaster, and assigned Celomar as his head advisor on matters of conflict. Ever since then, Celomar had dwelled where the front lines were, moving himself and his few personal belongings every time one of his successful assault plans came to fruition. To most men, he was kind and wise; harsh, perhaps, but kind, a trait rarely seen among men in his line of work. To the Odd Three, however, he was something of a father figure, guiding them in matters both physical and psychological.

He remained faithful to the Broken Cloaks until his tragic death in the Efugian Massacre on January 12th, 242 AC, at which point the war effort was on its last legs, no matter how one looked at it. After his death, Jorry and Garryt became depressed, and lost the will to fight. The Lavosi Gang Wars ended on the 1st of February, just four weeks later. When they later unsuccessfully attempted to assassinate Victor Damius two years later, Celomar's death was cited as a chief inspiring factor.

Retrieved from "https://a-crowns-price.fandom.com/wiki/Celomar?oldid=9393"
Community content is available under CC-BY-SA unless otherwise noted.