A Crown's Price Wiki
Register
Don't have an account?
Sign In
Advertisement
in: Kingsland, Cities, House Sewick,
and 2 more 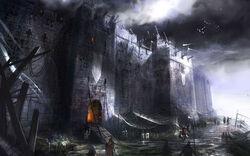 The City of Brand is built almost entirely of stone, all the walls, buildings, and roads built from solid stone, carved straight from the mountain the city rests on. While some more modern wooden buildings have been constructed, such as most of the Market District, all important infrastructure remains inside the thick stone buildings of the city. Due to the city's position on the side of Castle Mountain, it's somewhat layered, with the more aristocratic buildings and the Keep being positioned towards the top.

The Hollow District is just beneath the Hollow Keep, and has it's own set of shorter, thick stone walls. These walls are ancient, and are more for keeping the district seperated from the city than practical defense. The buildings here are significantly larger, though still fully made of stone.

Brand's infamous reputation for being unsiegable stems mostly from it's forboding defenses and history, as it has been thousands of years since any force has tried. The stone architecture of the city makes it unblazeable, and the high, thick walls and gates are too strong for the blunt trebuchet to shatter. Brand has a specific infrastructure designed to make the city as hard to break as possible, a special farming community set up at the highest points of the city, far beyond the reach of catapult, where only cabbage is grown to ensure the city never starves.

Being a cold-temperered crop, the city could survive off cabbage through the whole year, even the winter, rendering blockades ineffective. Sieges in the past were either attempted using ladders and siege towers, which failed due to the wall-mounted defenses and fire archers, or through blockading, which was largely ineffective. Thus, Brand has never been successfully sieged in it's seven-thousand year lifespan.

The City is considered moderately prosperous, if largely controlled. Due to it's position in the Kingsland and it being the seated capitol of the Dukedom of Caden, it saw a fair deal of trade and migration. Life in the city, while fair, was very strict. The City Guard were trained to Caden's own laws, and dissent was considered very dangerous in the City, as any talk of rebellion or uprising was an immediate trip to the noose. Taxes in the city have been at a set standard for thousands of years due to the ruling house's extended time in control. This could be good or bad, depending on the City's prosperity, but since the 8E 346 rebellion, the City has flourished somewhat with the influx of migrants.

The Hollow District was Brand's equivalent of a Noble's district, where the richer and even noble families would live in. Many noble houses from other fiefs within Caden had family living within the district. Though this tradition had gone on for eras, it was always a veiled threat to most houses from the ruling House that if they rebelled, their family could be taken hostage.

Brand is among one of the very old cities of Andoras, founded around 2E 340 by the newly founded House Sewick, who have managed to keep control of the city since. While upon it's founding it was little more than a small town, it has since grown to be the stalwart capitol of Sewick lands. Brand was the tool of the Sewick's for standing in the way of the Dayton's, and their key to keeping either their rule.

While Sewick influence, land, and power has waxed and waned throughout the years, the City of Brand has always remained their seat. The city has not been involved in war often, as it's governors have kept a safe stance. What makes Brand unique aside it's architecture is the fact that it rests on one of the only mountains in the Kingsland. The City is currently the capitol of the Dukedom of Caden, the current primary title of House Sewick, governed by Duchess Catina Sewick from the Hollow Keep.