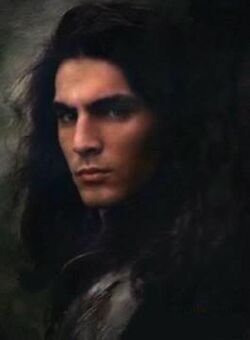 Bogdan stood taller than the average man, but his form was lean and fit, giving him an agile impression. His hair and eyes were both the typical black of the locals, and his hair was usually long and untrimmed, falling to his shoulders. His skin was a darker shade of the typical light skin, and his face was poised and forboding. It was said that his eyes had a visage of deep wisdom behind them, occasionally cursed by a sheen of anger.

Bogdan tended to wear dark gray, embroidered garments in his spare time, often accompanied by a tunic. While ruling, he only wore the darkest of blacks, to emphasize his face, and they were considered simpler clothes than his normal attire.

Bogdan was sociopathic for most of his life, looking at things objectively and with a detached mind. He grew up without much of a conscience, though he tried to empathize with his family often. He took his dulled emotions and lack of empathy with concern and some anger, but for the most part he was just antisocial and kept to himself. He was skilled in putting on a facade of being normal and happy like the rest, in fact was quite liked by his peers and the smallfolk aswell. After his father's death, and his ascension to the Seat, he grew colder, as his father had understood and sympathized with his condition.

After he was wounded just before the Tax Massacre, however, his attitude changed drastically. He lost what made-up sympathy he had fooled himself into having, and began to do things the way he wanted, without thought of others.

The realm was in the midst of what is known as the Tax Rebellion, a small force of armed peasents who were more protestors than rebels were picketing shops and government buildings, aswell as the Hollow District. Bogdan had exited the Hollow District with his guards to try and speak with the peasents, in hopes of calming them. However, the peasents grew only angrier as he explained why they were taxed so, and from somewhere within the crowd, a knife was launched towards him. It scraped over his face, failing to do any real damage aside a deep cut under his right eye, leaving him with a scar.

Though the injury hardly killed him, it ignited his anger and Bogdan furiously ordered the mob killed, to which the City Guard complied. This was Bogdan's first act as Duke, and horrified the City, being dubbed the "Tax Massacre". Homes that housed the families of protestors had bodies staked to their walls, as punishment and reminder, and so began Bogdan's nine year rule.

Mordran Sewick had Bogdan betrothed to Sabina Lane, Lady of Newan, and daughter of House Lane's current head. This betrothal was meant to reignite the loyalty that House Lane held for House Sewick, which had stagnated somewhat with Caden's inactivity. The two had two children, twins Gabryel and Merril Sewick. With Gabryel as the firstborn and thereforge legal heir.

Under Bogdan's rule, the County of Manewall was brought into the Dukedom of Caden, having been taken in war. The County of Manewall refused, having been hoping that the Duchy of Parrem would come to their aid. However, Parrem refused to go to war with Caden, leaving Manewall alone in what was more of a slaughter than a two-sided war. Bogdan had Caden's armies use a scorched earth tactic, razing their vineyards and villages as they advanced towards the county capitol, Elorin.

At Elorin, Evan Moran(the Count of Manewall), formally surrendered, begging Bogdan to spare the city. Infuriated by Manewall's resistance so far, Bogdan refused, and had his forces sack the city, his soldiers encouraged to rape and kill citizens with impunity. This is known simply as Elorin's Fall by the County of Manewall today.

Upon returning to Caden, Bogdan was surprisingly idle for almost three years. His crippling grip on Caden and the raised taxes aside, many had expected him to wage war on the closest neighbor he could find. He spent a great deal of time in the County of Rolor, evidently paranoid of it's ruler with how easily they had given up.

Little is known about what he spent his time doing in these three years, however, and nothing was heard from the Hollow Keep until 8E 318, when Gabryel Sewick exited the Hollow Keep and declared to the people of Caden that Bogdan Sewick had died. These words were greeted with relief and some apprehension, as none knew how his son would rule in comparison.

Retrieved from "https://a-crowns-price.fandom.com/wiki/Bogdan_Sewick?oldid=9464"
Community content is available under CC-BY-SA unless otherwise noted.