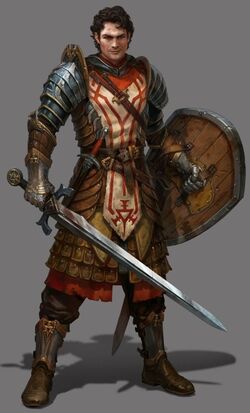 Season(s)
N/A
Titles
Royal of Thyllanor
General of the Thyllanorian Army
Also known as
N/A
Status
Deceased
Age
Died June 5th, 347 AC (aged 28)
Date of birth
September 24th, 318 AC
Death
{{{Death}}}
Origin
Morano, Lord Paramouncy of Thyllanor
Allegiance
House Karthmere
Thyllanor
Religion
The Five Paragons
Family
House Karthmere
Portrayed by
N/A
General Inferior Allistair Karthmere (318 - 347 AC) was a first cousin of Dalan II Karthmere, son of Tyralt Karthmere, younger brother of Rollick Karthmere, and the first primary military commander in the northern campaign during the 346 AC rebellion for the rebel side, which later won the war and deposed the Dragomári. Born in Morano in 318 AC, he attended a local university in his twenties, but disillusioned with his path in life, dropped out to pursue a martial career and became a promising commander. He saw his first (and only) action during the Civil War, and died during The Battle of Mountain's Tongue, alongside similar commander Balthasar Grimolt.

Allistair grew up as a cousin of the main Karthmere line, having been the nephew of Dalan I Karthmere, and was well-aware that he would likely never see the realm pass into his hands. Instead, he made the best of his talents -- namely, his skill as a tactician and commander -- and was brought up originally attending a martial school for this matter, but decided to leave and enlist in the army directly, as an officer. He was accepted and joined his first regiment on 341 AC, in the heat of the Tentative Years. At the time, the Lehald Mandate, which banned personal weapons, had just been decreed by Aegor IV Dragomyr, and men like Allistair were some of the first to call out for change. A midnight robbery which nearly took his life made Allistair one of the main proponents of this, and by the time his voice was heard, the much-larger Mandrom Heist had just occurred, taking thousands of gold from House Mandrom and rendering them penniless (and according to The Noble Houses Act, no longer a noble House). Allistair sought to fight what he saw as injustice, and was one of the first Karthmeres to publicly announce his support for another rebellion.

During the Civil War

When war was officially declared on April 29th, 346 AC, Allistair was eager to prove himself, both wanting to test his mettle on the battlefield, and to fight for a cause he saw as just. He was promoted to the rank of Lieutenant Inferior after proving his worth during some of the war's earliest skirmishes, and was sent to the Battle of the Pantau Bay on May 9th. Some of his tactics were integral to save some of the retreating rebel forces, who were decisively defeated. Thinking that the Kingdom would retaliate even further, Allistair was then sent north to defend Thyllanor itself, where he sat mostly idle until June of 347 AC. A few months before then, Balthasar Grimolt and a small Grimolt regiment grouped up with Allistair's own, forming the army that would later face House Ramstone.

The Battle of Mountain's Tongue

On June 2nd, a messenger arrived to tell Allistair and Balthasar that they were required down south, in Dragonspire City, to aid in the First Siege of Dragonspire. Then stationed in the Duchy of Vaerikland, Allistair and his army began moving south, but his army lacked much in cavalry, which made scouting slow and the army grounded. Loosely following the Westfarer Route, they made their way through the eastern Moonlyt Peaks, making their way around the mountains and stopping near the town of Ramstone, on the banks of the river Mountain's Tongue. They made camp here, and were caught off-guard when an army led by Feldrich Ramstone suddenly charged them, decisively achieving victory for the Kingdom and preventing any reinforcements from the north to attend the First Siege. Allistair died in the heat of battle, and had no time to tactically analyze the situation, as it happened too quickly to make preparations; compared to some other battles of the war which took days, the Battle of Mountain's Tongue was over in three hours. Balthasar Grimolt was also killed in action as well.

Allistair Karthmere's body was recovered the day after the battle, and returned to Faercrest, where his remains were interred in the Karthmere Family Crypt. He was posthumously awarded the military rank General Inferior in the Thyllanorian army.

Retrieved from "https://a-crowns-price.fandom.com/wiki/Allistair_Karthmere?oldid=10083"
Community content is available under CC-BY-SA unless otherwise noted.