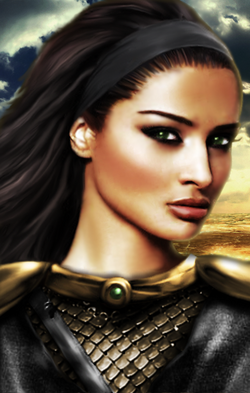 Alania holds the growing beauty of an Edranishwoman, but as she's only 16, she's yet to flourish. Her face is smooth and unblemished, and her hair is long and falls to her shoulder. Her eyes are dark green, and her facial features are set, making her look more mature. She typically wore elegant Edranish gowns of yellow, lime green, or black.

Alania was quiet, less sociable than her brothers and less outgoing. She preferred reading in the quieter areas of the Deyn Palace, and spent most of her time in sulk. She was different before, but is undergoing minor depression at the prospect that she will soon have to leave Edrane to marry someone she doesn't know.

Alania was the last child born to Dessar and Jonella Tyseth, and grew up with her older brothers in a typical happy childhood, unfettered by martial education, though her father did force her to go to diplomatic lessons alongside her brother Cyrin. The experience was boring for both, but the company made it bearable and the two learned the skills somewhat well, but Cyrin seemed to take to it more.

When she turned 15, she learned about the ways of foreign arranged marriage, and her father told her how she would leave Edrane to marry one day, likely next year. She was devastated at the concept and she grew more introverted over time.

Alania spends most of her time in wait, reading or walking and waiting until she found out which foreign noble she would be forced to marry. She could only silently pray to nothingness that he wasn't an old slob or cruel rat, but her expectations were the worst.

Retrieved from "https://a-crowns-price.fandom.com/wiki/Alania_Tyseth?oldid=9581"
Community content is available under CC-BY-SA unless otherwise noted.