A Crown's Price Wiki
Register
Don't have an account?
Sign In
Advertisement
in: Kings, Deceased kings, Andoras,
and 7 more 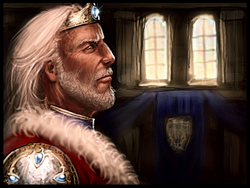 Aeramor Dragomárus (264 - 320 AC) of House Dragomárus was the ninth King of Andoras, from his crowning in 298 AC to his death in 320 AC. His reign was a relatively unmarred one, and for that matter, a relatively irrelevant one; it only came to prominence when he brought the Kingdom of Andoras into the War of Woods from the day of his coronation, and then until the war ended in 310 AC, and then again in the last year of his life in a conflict with Thysia that led to the utter destruction of his life, his ship, and the majority of the fleet that came with him on an embarkment to engage the Thysian navy. Helman Stone was one of the few who saw Aeramor Dragomárus die and lived to tell the tale.

No remains were able to be found of Aeramor. It is possible they sunk to the bottom of the sea with the fleet and his ship, and that he received something akin to a burial at sea. The Dragonspire archives embassy offers a large sum of money or a land grant for anyone who can find Aeramor's remains and return them to their proper resting place; the Dragonspire catacombs.

Aeramor was born to Abregor Dragomárus and an unknown woman in 264 AC. At the time, his father was first in line to inherit the throne to succeed Aeramor's grandfather, Aeganar III Dragomárus. As time went on and both men seemed to be dying of various ails and illnesses, Abregor died before his father in 295 AC. Aeganar III, already dying from an unknown physical condition, then died 3 years later. Aeramor took the throne in 298 AC, and almost immediately was being begged by the Ethrykian Alliance to join their side of the conflict in the War of Woods. Eager to prove himself and bring a renewed sense of glory to Andoras, who had prior not done much in warfare besides The Mournare Nights since 201 AC, he agreed and the first armies of Andorasi origin landed in Doras Edrossi later the same year. After a hard-fought conflict, the war ended in 310 AC, and Aeramor continued the work of his grandfather, building up the infrastructure of the nation during peacetime and commencing trade with the Edrossi nations that they had saved from the Zaentovi horde. This included Thysia, whose forces would later take his life in a naval battle.

Diplomatic relations with Thysia had been kindled during the reign of Aeramor Dragomárus. In 318 AC, he had managed to secure a lofty trade route between the White Sea that was rather devoid of piracy due to the extensive patrolling of the waters, and upon hearing that the sanctity of the route was breached once, Aeramor demanded to see for himself, and soon began to find pride in his work of sailing himself to do the work, something that would leave a lasting impression on the young Helman Stone II, who had just graduated naval academy at the time. This would ultimately be his demise. The key reason for securing the trade route was to transport the euralaya spice, something that was in high demand for its exotic effects on food and the fact that it only grew in a few places in the world -- Thysia being one of them. While parts of Andoras also had the potential to grow euralaya, Thysian euralaya was particularly renowned for its potency. Using the threat of superior military power, magistrates and market officials on the Andorasi side began to extort more spice than what it was supposed to be paid for.

Thysia soon became annoyed and even violent in reaction to Andorasi ships arriving at their ports. The general consensus of the Thysian government was that Andoras was demanding far too much of the spice, even for their standards, and threatened to open fire on the next Andorasi ship that came through. Because of the deep internal corruption within the commercial side of government in Andoras, word of this never reached Aeramor. Once the Thysians stayed true to their word and sank a transport ship entering Thysia's port, Aeramor was simply informed that the Thysians had openly declared war because of a lack of money being paid to them for their spice. Their plans were to raid them for all the money they could plunder, and leave Andoras "A burning heap visible from the other side of the pond", as one courtier put it.

None of this was true, and slander had played a big part in the conflict beginning. Aeramor, shocked at Thysia's decision, was forced to sail to the White Sea and engage the Thysians head-on to defend his nation. It was not meant to be a military encounter, but rather a period of negotiation, which is why he brought a small fleet, that was armed if necessary. Their arms would later prove useless; as they approached the city of Thysia proper, preparations for war were already being made in the city.

The Thysians held no mercy and opened fire relentlessly as soon as the Andorasi came into view, leading to the small fleet being torn to pieces by bombardment from the shore. The Andorasi had no time to retaliate, and were massacred as one ship went down after another. One particular ship, the Drowned Duchess, was present, and began to retreat as soon as the siege weaponry began firing. They were able to witness the whole ordeal from a few miles away, and the blaze from the burning fleet lit up the entire shoreline of Thysia, which was visible from quite a distance due to the conflagration.

Aeramor definitely died in this massacre, although no one can confidently say how or when. Sailors on the Drowned Duchess give several different stories, though one in particular is agreed with; that while ascending the stairs of the ship's deck to get to the surface, the mast of his ship fell and crushed him and several behind him, leaving the rest of the men on the ship demoralized and vulnerable.

The 'war' began, even though no further conflict between the two nations were held until just seventeen days later, when Aeramor's son and now the new king of Andoras, Aeganar IV Dragomárus, flew his father's dragon Vhalax to burn the entire Thysian fleet. An unanimous surrender was declared on Thysia's side, but Thysia and Andoras never traded with one another again. Aeramor's story ends there, and to this day, no one has been able to find his remains or the fleet that he died with.