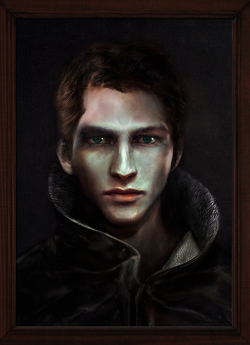 Adrian Karthmere (born February 12th, 331 AC) is the younger brother of Dalan Karthmere and the lord of Drenn Keep. He serves as auxiliary general of Thyllanor, and is heir presumptive to the realm. Son of Dalan I Karthmere and Viviana Messys and their youngest child, he is the former Highlord's second son.

Adrian stands at an average height; his figure is toned and lean, lacking bulk muscle or broadness of shoulders. Instead, his body is athletic and fit. Black of hair and blue of eyes, Adrian's face is smooth and somewhat lined, with a firm jawline.

Adrian shuns the traditional Karthmere style of red and gold garments, instead donning a dark leather coat with equally dark, firm fitting clothes. At the left of his belt is a small sheathe for a long, curved dagger with a silver colored, lion-headed hilt.

Adrian is a vicious young thing, embodying many of the worst traits that a man can have -- however, this is behind closed doors. Cruel, careless, sadist, all of these words could be used to describe Adrian, but few knew enough of the truth to do so. The lords of Thyllanor knew him as hotheaded, disrespectful, and potentially cowardly; quick to anger but slow to fight. Only his close family and some of those he interacts with daily truly know of his depraved nature, which he does a good job of hiding from the general public. Some have compared his mentality to that of Malveus III Karthmere, who, despite his timid nature, was secretly thought of being an evil man out of public view and was even accused of assassinating his father Vicede II Karthmere to come to the throne -- no one would say this to his face, of course. Malveus III, notably, is also the same man who instilled a revolutionary mindset in Dalan I Karthmere, which led to the Farmers' Revolution and later the Civil War via his grandson Dalan II. As Adrian is his younger brother, the trait may continue with him.

He is disparagingly referred to as Cravenclaw by many, though rarely to his face, as the moniker was given due to his failure to take the field in any of his battles. Serving as an auxiliary general of Thyllanor, the Karthmere was known to be clever but not in the admirable way. He was skilled in dirty tricks, lies, and military deception, never shying away from doing anything necessary to gain his victory regardless of the stain on his honor.

Adrian's inner circle and some of his family knew his cruel nature, the boy reveled in tormenting those around him. Whether this was born of lust for power, natural sadism, or mental illness was largely unknown. His company and court is looked down upon by many, but few lords of Thyllanor have the gall to scorn him for it. Many of his court were thieves, thugs, and sycophants, all crudely introduced to the ways of nobility.

Outside of Drenn Keep, Adrian manages to keep tame. He is brooding, spiteful, sarcastic, and disrespectful to many, but he rarely gives threats. In the presence of his close family, he is more solemn and less prone to irritation.

Adrian grew up the younger brother to Dalan Karthmere and throughout his childhood was often his older brother's shadow. He was a known bully and troublemaker, refusing to respect the concept of authority until he was well into his teen years.

Adrian was young during his time in the 346 AC Rebellion, as such he had an off-handed stake in his command. Having only recently been granted the Lordship of Drenn Keep and it's surrounding territory. Adrian, being the Highlord's younger brother, was granted minor command of Gothaen Synthor's Crimson Lions as well as a detachment of Thyllanor levies.

Preceding the second siege of Dragonspire, he showed a surprising stroke of wisdom in returning to Thyllanor and using the authority behind his last name to forcefully raise more levies among the lords. While this caused an obvious uproar, Adrian nonetheless marched south with fifteen thousand soldiers in reinforcements to help finish off the rebellion.

Though the victory could not be solely attributed to Adrian's army, the sudden reinforcements was a key point in bolstering morale for the rebel forces. It was this action that drove Dalan Karthmere to name him auxiliary general, despite the fact that Adrian himself had spent the war in a luxurious carriage and had actually slept through the actual battle.

Adrian's tactical competency had earned him some respect, but his failure to partake in battle and his controversial move to impress Thyllanorian soldiers into his army for the Second Siege of Dragonspire had severely damaged his reputation. Some thought him a coward, and many more thought him a troublemaker for his disrespect for noble tradition.

Many lords knew of his distasteful attitude, but few knew that the boy was far more cruel then he let on. Drenn Keep is not commonly visited, and as Adrian sits as lord of the castle, it is his domain to rule as he pleases. The occasional village girl goes missing, a courtier shows up to court covered in bruises, all the result of Adrian's wroth.

The situation has not gotten out of hand, but Adrian has a very marked sadistic streak and an outright dismissive attitude towards authority. There are almost no older minor nobles residing in Drenn Keep, instead Adrian has loftily raised up several new minor noble houses out of his courtiers to serve at his court.

Adrian attends war councils as befitting his position, and usually stays at the royal castle for weeks at a time.

His older brother, Adrian looks up to him and shows a streak of loyalty not seen elsewhere in his life. The sibling connection between them seems to take priority over his repulsive cruelty, letting a more tame Adrian shine when he's called to advise. Dalan is aware of his younger brother's cruel nature.

He holds a soft spot for his older sister, who is closer to him in age than Dalan. She had the remarkable ability of being able to calm Adrian down when he became angry, but this has since faded.

The two have always been at odds due to Adrian's disrespect for authority, but their familial connection has kept Adrian in line as far as their relationship goes. Adrian holds a grudging respect for him.

Retrieved from "https://a-crowns-price.fandom.com/wiki/Adrian_Karthmere?oldid=10165"
Community content is available under CC-BY-SA unless otherwise noted.